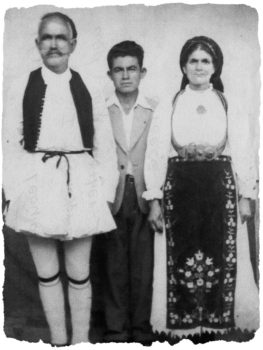 Calothronion, Greece… June 1941 – Aron Yerushalmi, Moshe Weinbaum, and Asher Schwarz, three Jews from Palestine, volunteered to serve in the British army. They were captured by the Germans in Greece but managed to escape from the train bound for Germany. The men fled from village to village searching for food and shelter. Being Jews, they received little assistance until they met Panayotis Giortsas and his father, Leonidas, who approached the three men and said, “We do not care whether you are English or Jewish, our duty is to help you.”

From that day on they took the three young Jewish men under their roof and supplied them with food, clothing, and weapons. During the day the men hid in the mountains, and at night they stayed with Panayotis and his father, sleeping on the floor since there were no beds.

When the Germans, escorted by Greek police, suddenly arrived in search of the British soldiers who had escaped from the train, Panayotis’s father and uncle, the priest of the village, moved the three soldiers to a church in the hills. Panayotis kept watch all the time and brought them food.

Leonidas procured false identity cards for Aron, Moshe, and Asher. They accompanied the soldiers to Athens where they were given shelter by relatives. When Aron and Asher were captured, Panayotis came back for Moshe and took him back to the village. In August 1942, Moshe was arrested by the Italians and sent to a camp. Panayotis still managed to bring food to Moshe.

In 1946, Leonidas Giortsas was killed by the communists and his home was burned down. All three Jews returned to Palestine and kept in touch with Panayotis.

Panayotis Giortsas died in February 2012 at the age of 85.