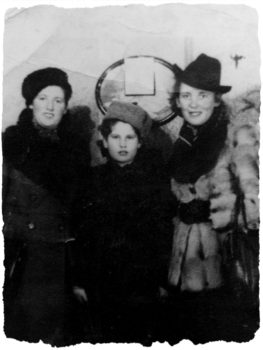 Leokadia Kawalec, her mother, and sister

Tarnobrzeg, Poland… October 1942 – When actions against the Jews increased, two families sought refuge with the Kawalec family, which included Leokadia, her sister, and her parents. For more than two years the Kawalec family hid Moshe Hauer, his wife and four children, and the family of Szymon Wolbromski.

A hiding place was constructed in the stable, which was connected to the house. A secret door was built into the roof, which joined the house to the stable. This allowed the Jews to have access to the house without being seen. They lived in constant fear of being discovered. Getting enough food for so many people was dangerous, since villagers knew that there were only four people in Leokadia’s family. In 1944, they were liberated by the Russians.

Leokadia Kawalec passed away in December of 2008.