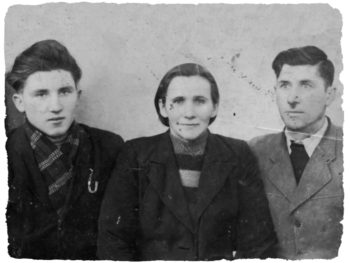 Leka, Poland… May 1942 – Israel Wajnbaumm arrived at the Piwowarczyk farm with his wife, Lola, and their son, Albert, seeking shelter. Jozef Piwowarczyk’s parents, Wladyslaw and Maria, who were very religious, agreed to help the family. For the first few days, the Wajnbaumms hid in the house. The killing and deportation of Jews escalated. The Germans went from house to house searching for Jews. Israel and his family could no longer safely stay in the home. Jozef and his father built a more secure hiding place in the barn that was just large enough for the family. With each passing day, however, the danger of being discovered increased. Jozef and his parents were forced to build two other hiding places for the Wajnbaumm family because the Germans continued to search for Jews.

The Wajnbaumms hid with the Piwowarczyks for three years. During this time, the two families became very close. They all survived the war.