The Jewish Foundation
for the Righteous

With the
Recognition of Goodness Award

Since its founding, the JFR has provided more than $40 million to rescuers – helping to repay a debt of gratitude on behalf of the Jewish people to these noble men and women. The JFR’s Holocaust teacher education program has become a standard for teaching the history of the Holocaust and educating teachers and students about the significance of the Righteous as moral and ethical exemplars. 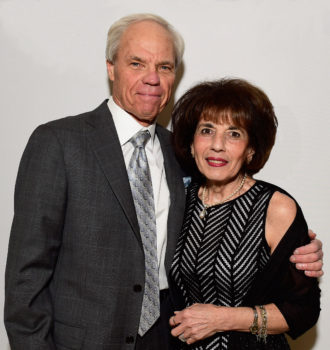 Yolanda and Raymond have been married for 48 years. They have two married daughters and 6 grandchildren.

Yolanda earned her BA degree from the College of St. Elizabeth and a Master’s degree from Seton Hall University.  She was an early childhood educator for 30 years and is a past President of the New Jersey Association of Kindergarten Educators.

During retirement, she volunteered at Hackensack University Medical Center in pastoral care . She gives her time and financial support to the Lustgarten Foundation in memory of her sister.  She is also an Advisory Board member of the College of St. Elizabeth’s Center for Holocaust and Genocide Education . Yolanda and Raymond  have endowed its Annual Week of Holocaust Remembrance and Interfaith Dialogue Program.

Raymond is a private real estate investor in residential and commercial property in NJ and Minnesota.  His lifelong interest in real estate started during his thirteen years at Morgan Stanley.  During his five year’s at Lazard Freres he and Yolanda became acquainted with the JFR and were able to meet rescuers.

He became a private investor through Jacobs Enterprise and Hamilton Real Estate.

Raymond is a Trustee of the College of St. Elizabeth and a board member of the New Jersey Apartment Association, Clifton Boys and Girls Club and Clifton Rotary.  He also supports several charities for the developmentally disabled as his sister has Cerebral Palsy.

Raymond has a BS degree from Rider University and an MBA from Rutgers University.

As a couple they embrace the words “to those who are given much, much is expected.”

Yolanda and Raymond are humbled and gratified to be honored by the JFR, an organization they have been involved with for 30 years.

To make a donation without purchasing tickets, please click here.