THE LIBERATION OF PARIS 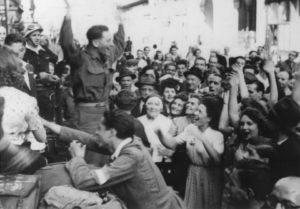 The Liberation of Paris
(Photo courtesy of USHMM )

70 years ago this month, Paris was liberated from German occupation. Germany had occupied Paris since June 1940. Some 150,000 Jews, including more than 60,000 foreign-born Jews, were registered in Paris by the end of September 1940.

The persecution of Jews in Paris began as early as October 1940, with the Nazis bombing seven synagogues throughout the city. During 1940-41, about 10,000 Jews were arrested in Paris, while thousands more fled to the southern unoccupied zone. In 1942, the Germans, with the assistance of the French police, began to deport foreign and stateless Jews from Paris to the Drancy, Beaune-la-Rolande, and Pithiviers camps. From these transit camps, the Jews were deported to death camps in the East.

One of the most notorious round-ups of Jews in Paris was carried out in July 1942, when 13,000 Jews were concentrated in the indoor cycling arena, the Velodrome d’Hiver, where they were held for several days without food or water. They were deported to Auschwitz after first being sent to Drancy. During 1942, nearly 30,000 Jews were deported from Paris. Many Jews managed to go into hiding often with the help of aid organizations, to flee to the southern unoccupied zone, or to join the French resistance.

By the summer of 1944, the German army was weakened and the French resistance took the opportunity to plan a general strike against the German occupiers. The strike started on August 15, 1944, when the employees of the Paris Metro, followed by the police and French Armed Forces (Gendarmerie) went on strike. The next day, the postal workers and other workers from across the city joined.

On August 24, the 2nd French Armored Division entered Paris in the West while the 4th US Infantry division entered eastern parts of the city.  The majority of German troops had escaped during the night. The German Army officially surrendered on August 25,1944. By this time, at least 50,000 Jews from Paris, most foreign-born, had been deported and murdered.

During the Battle for Paris, some 800 Resistance fighters were killed and another 1,500 were wounded.  The 2nd French Armored Division lost 71 men with another 225 wounded. More than 127 civilians died during the liberation of Paris.

When discussing the liberation of Paris with your students, you may want to consider the role geography played in the liberation of Paris as well as the mobilization of the French Resistance and Allied troops. Students might also compare and contrast the severity of the German occupation in different territories and the treatment and survival of the Jews in each.  Where was it possible for Jews to flee from Paris and why? What organizations help Jews in and around Paris to go into hiding?