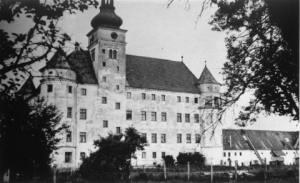 Hartheim castle, one of the six euthanasia killing centers set up by the Nazis.
(Photo courtesy of USHMM Photo Archives)

Human beings who are incurably ill – physically or mentally – should be eliminated from German society. This was a central tenet of Nazi ideology from the outset and a goal that Hitler intended to achieve. Adapting the Darwinian ideas of selection and survival to their aims, Hitler and his learned henchmen sought to ensure that those deemed unworthy of life would be removed from the population. Such an approach, they felt, was fair not only to the healthy Germans who were burdened by the weak and worthless, but also to the weak and worthless themselves. Preventing such individuals from reproducing equally defective offspring is an act of humanity, Hitler argued. Taking this view one step further, he claimed that killing these unfortunate creatures is an act of mercy.

In his first few years in power, Hitler decreed that people with hereditary diseases and mental disorders may neither reproduce nor marry. Such policies were widely publicized and packaged in the language of humanitarianism. These laws, however, soon led to a more violent proposition: euthanasia. In 1937, an SS publication endorsed the idea of killing those unfit for life, again invoking the rhetoric of compassion. Such discussion had already begun in the medical community, but Hitler felt that a euthanasia program could not begin until the war was underway. In late 1938, though, Hitler authorized the creation of the Reich Committee for the Scientific Registration of Serious Hereditarily and Congenitally Based Illnesses, charged with examining children with various conditions and murdering those deemed unfit for life. 5,000 were murdered in special Pediatric Departments set up in thirty hospitals and sanatoriums.

In mid-October 1939, Hitler expanded his euthanasia program to incurably ill adults. He also allowed for a change in the method of murder – carbon monoxide gassing. Hitler entrusted Reichsleiter Philip Bouhler and his personal doctor, Karl Brandt, to oversee the initiative, code-named Operation T4 for the Berlin address – Tiergartenstrasse 4 – where it was headquartered. Those selected for death by the doctors on the Reich Committee were sent in buses with darkened windows to one of six killing centers. They were stripped naked while their files were reviewed one last time by a physician, and were then led to the gas chamber. Inmates in the East, instead of being transported to a killing center, were gassed in trucks operated by aSonderkommando, or Special Squad. The corpses were cremated, and the victims’ families received letters saying that their loved ones fell ill and died.

When Hitler stopped the program August 1941, about 70,000 people had been killed. Operation T4 was considered a success, and at Himmler’s request, the technology was soon extended to the concentration camps. And although T4 was halted in name, the Nazis’ euthanasia program continued through the end of the war.

Operation T4 invites discussion of several questions: how the Nazis’ made the case for eliminating the sick and weak from society; where this aim fit into their larger goals of purifying the German population; why gassing was introduced as a method of systematic murder, first to carry out the euthanasia program and later the Final Solution; and how medical ethics were turned upside down during the Holocaust.