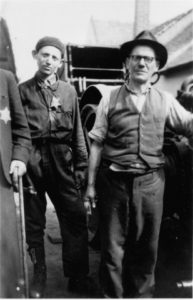 A father and son in front of their machine shop in the Debrecen ghetto.
(Photo courtesy of USHMM)

When World War II erupted, Hungary allied with Nazi Germany. The country’s leader, Regent Miklós Horthy, and his government issued severe anti-Jewish legislation. Jews were deprived of their livelihoods and civil rights and many men were conscripted in military labor service. However, until 1944, Hungary refused to ghettoize and hand over its Jews to Germany. This was a result of Horthy’s foreign policy.  Since 1942-1943 Horthy tried to distance Hungary from Hitler. In 1944, close to 800,000 Jews lived in Hungary (including the recently annexed territories), with 200,000 Jews in Budapest, Hungary’s capital.

On March 19, 1944, the German army occupied Hungary and installed Döme Sztójay, who was fanatically pro-German, as prime minister. In April 1944, he ordered the approximate 500,000 Jews in the countryside to be concentrated in certain towns and cities. Jews were placed in ghettos, which were usually sections of the city that were formerly Jewish areas. With scarce food and water supplies, no access to medical care, poor sanitation, and overcrowding, conditions in the ghetto were terrible. The Jews were prohibited from leaving the ghetto’s enclosed area and Hungarian gendarmes, who were sent to round up the Jews, tortured and robbed them in several cases.

Life in the ghettos was short-lived – it was temporary and existed until Adolf Eichmann’s grand coordination for the deportation of Hungarian Jews was finalized. In mid-May, 1944, the deportations began, and in less than two months, 440,000 Jews from the countryside were deported by the Hungarian authorities. While a few thousand of those Jews were sent to perform slave labor in Eastern Austria, the majority were deported to Auschwitz. Of those who arrived in Auschwitz-Birkenau, about 320,000 were condemned to immediate death in the gas chambers and about 110,000 were forced to work in Auschwitz and other camps. For the Nazis, the arrival of Hungarian Jews in Auschwitz and their rapid extermination marked the height of German productivity in carrying out the so-called Final Solution.

By July 1944, the Budapest Jews were the only Jewish community remaining in Hungary. Due to the worsening military situation for the Axis powers and increased international protests, on July 6 Horthy declared an end to the Jewish deportations, and in August, he dismissed Sztojay’s government. Upon pressure from the Germans, Horthy agreed to restart the deportations in August. However, after Romania withdrew from the Axis and joined the Allies, Horthy reaffirmed his decision that no further deportations would be carried out. In October 1944, the Nazis forced Horthy to resign and appointed Ferenc Szálasi, the leader of the far right Arrow Cross party, as the new Hungarian leader.

Under his rule, fanatic Arrow Cross party members ruthlessly murdered hundreds of Jews and forced other Jews to perform brutal labor. While Jews previously resided in several buildings throughout the city that were simply marked with a yellow star, by December 1944, Budapest Jews were forced into an enclosed ghetto. In the following weeks, the Arrow Cross ordered several thousand Jews to march to the Danube River, then shot them and discarded their bodies in the river.

In November 1944 the Hungarians forced several thousand Jews to march on foot to the Austrian border. Thousands of Jews died along the way from starvation, exposure to bitter cold, or shootings on the whim of the Hungarian guards. The Jews who survived and arrived in Austria were forced to work on fortifications on the border and later were shipped to the concentration camps of Dachau and Mauthausen.

Budapest and its 100,000 remaining Jews were liberated by Soviet troops on February 13, 1945. Most of the remaining Jews had survived by hiding, and many had been assisted by Raoul Wallenberg, and others, such as Giorgio Perlasca and Carl Lutz, who used their diplomatic connections to save Jews.