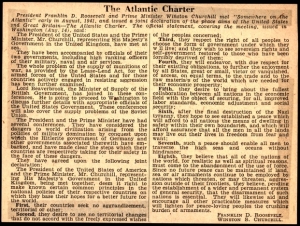 On August 14, 1941, British Prime Minister Winston Churchill and U.S. President Franklin D. Roosevelt issued a joint declaration known as the Atlantic Charter.  The document included a list of eight common aims that outlined a vision for a postwar world, even though at this time the United States had not yet entered the war. Among the points included a commitment to self-determination for all, equal access to trade, and the promotion of peace after the defeat of Nazi Germany.

Some Holocaust historians, such as Tobias Jersak, trace the decision to launch the “Final Solution” back to the declaration of the Atlantic Charter.  Hitler saw the Charter and its immediate impact as confirmation of his fear of a concerted Allied conspiracy against him and his aims for a dominant Nazi Germany.  To date, there has been no written decision or orders found in which Hitler launched the “Final Solution”; therefore, historians and other scholars differ in their assessment of the evidence pointing to when the decision actually took place.  Some scholars, such as Christopher Browning indicate the autumn of 1941, while others, such as Christian Gerlach, point to the end of 1941 as the start of the “Final Solution”.

One week after the Atlantic Charter was signed, President Roosevelt delivered a speech to Congress stating that, “It is perhaps unnecessary for me to call attention once more to the utter lack of validity of the spoken or written word of the Nazi government. It is also unnecessary for me to point out that the declaration of principles includes of necessity the world need for freedom of religion and freedom of information.”  President Roosevelt hoped that the Charter would encourage the American people to support entering World War II. However, the United States did not enter the war for four more months. Churchill was disappointed in the outcome, hoping that if the United States gained a larger presence on the international stage they would increase military aid to Great Britain. However, in the end, both countries united in a public condemnation of Hitler and created a growing sense of unity among the Allies.

After the creation of the Atlantic Charter, support and agreement for the principles spread.  A meeting in London led to the additional signatures of the exiled governments of occupied Belgium, Czechoslovakia, Greece, Luxembourg, the Netherlands, Norway, Poland, USSR, Yugoslavia and General de Gaulle for the Free French. Many believe that the pledge of cooperation for the Atlantic Charter led to the foundation for the United Nations. The Atlantic Charter was subsequently incorporated into the Declaration of the United Nations on January 1, 1942.