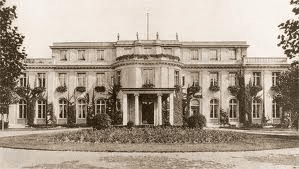 The villa where the Wannsee conference took place.
(Courtesy of House of the Wannsee Conference Photo Archives)

On January 20, 1942, Reinhard Heydrich, head of the Reich Security Main Office, convened a meeting at a lakeside villa in Wannsee, a suburb of Berlin. He invited fourteen high ranking Nazi officials to coordinate the implementation of the “Final Solution to the Jewish question”. The goal of the meeting was to hash out the logistics of Hitler’s intention to solve the Jewish question through systematic mass murder. Hitler, however, did not participate in the conference, nor was he even invited. The participants, eight of whom held PhDs, were top officials in the SS, party agencies, and the Reich government.  Among them were Adolf Eichmann, head of the Jewish Section of the Reich Security Main Office, and Heinrich Himmler, head of the SS.

Most of the attendees either had direct knowledge of or had participated in the systematic murder of Jews that had already begun. The Einsatzgruppen (mobile killing squads) began massacring Jews in the Soviet Union in July 1941. Deportations of Jews from Germany began in October of that year, and in November, the Germans began operating gas vans at Chelmno and constructing gas chambers at Belzec.

At the Wannsee conference, Himmler gained formal authority over the “Final Solution” and the use of the Jews as a slave labor force. Heydrich calculated that there were about eleven million Jews in Europe – including England and Ireland – and outlined a plan whereby they would all be deported to the east, put to work, and then killed. The Jews would build the German utopia, a proposed 80-billion-Reichsmark construction project. It was understood that those who were not worked to death would be systematically murdered.

The conference concluded after ninety minutes. Heydrich had feared that there would not be consensus among the participants. Those in attendance, however, not only agreed on the plans laid out at the meeting, but also left enthusiastic about making those plans a reality. You might explore the Wannsee conference with your students as part of a larger discussion about the evolution of measures taken against the Jews. It is important to note that while the meeting resulted in a more coordinated plan for genocide, the decision to target the Jews for annihilation had already been made.