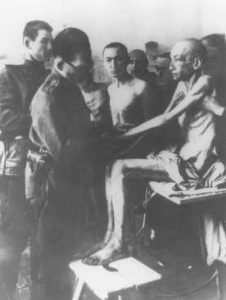 In Israel and the U.S., the Holocaust is commemorated most visibly on Yom HaShoah, Holocaust Remembrance Day, which is the 27th of Nissan in the Jewish calendar.  This date was selected because it is around the time of the anniversary of the Warsaw Ghetto uprising.  Because the Jewish calendar is not exactly aligned with the Gregorian calendar, Yom HaShoah usually falls in mid-to-late April, occasionally in early May.

Throughout much of Europe, however, Holocaust Memorial Day is January 27, the date which marks the anniversary of the liberation of Auschwitz.  In mid-January 1945, knowing that the Soviet Army was advancing, the Nazis forced nearly 60,000 prisoners at Auschwitz and its satellite camps to march west from the complex.  More than 15,000 died along the way, many from cold and starvation, and many from SS bullets.  Anyone who fell behind was shot.  The prisoners were put on freight trains in Wodzisław and sent to concentration camps in Germany and Austria.  Many died during this part of the journey as well.

In late January, the Germans forced another 4,000 prisoners from a subcamp of Auschwitz on a death march to the Gross-Rosen camp, and eventually to Buchenwald.  About one fourth of this group perished along the way.

On January 27, 1945 the Soviet Army finally reached Auschwitz and liberated the more than 7,000 remaining prisoners, most of whom were emaciated and near death.  Although the Germans had destroyed most of the storage buildings in the camp and the gas chambers and crematoria at Auschwitz-Birkenau, the Soviets discovered plenty of evidence of what went on, including hundreds of thousands of suits, shoes, suitcases, and more than 14,000 pounds of human hair.

For those of you who are educations and would like to use this in your classrooms consider discussing the following: The liberation of Auschwitz raised significant questions about the Allies knowledge of death camps and Nazi camps in general.  Why was Auschwitz not destroyed by Allied bombs? Why were death camps located in Poland, as opposed to France, Belgium, or other occupied areas?  Why did the Germans move prisoners from Auschwitz and its satellite camps to camps further west? How did the arrival of Allied troops affect those still alive in the camps?  How did the evidence of mass murder at Auschwitz affect the troops who liberated it?