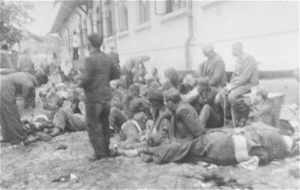 Jews assemble in the courtyard of police headquarters during the Iasi pogrom.
— Courtesy of USHMM

On June 29, 1941, one of the most violent pogroms against Jews was carried out in the Romanian city of Iasi.  Romanian officials and military units, German soldiers, and masses of residents all participated.  This resulted in the brutal mass murder of at least 8,000 Jews in Iasi.  Many were killed in their homes and in the streets.

Thousands more were arrested and robbed of their possessions by patrols of Romanian and German soldiers and were taken to the police station.  The next day, Romanian soldiers shot thousands of Jews who had been detained at the police headquarters.  Jews that remained were rounded up and were forced into packed freight cars.  They were deported by train to cities located southwest of Iasi.  Many perished en route from starvation or dehydration in the freight cars.

However, there were acts of rescue from individuals from the Romanian community. One such individual was Viorica Agarici.  Viorica was chairman of the local Red Cross in Roma.  A deportation train headed for a place called Targu Frumos with about 1,000 passengers was held up at the Roman station where Viorica was working. Taking advantage of her position, she insisted that some Jews be allowed to leave the deportation train and be given food and water.  Dead bodies were removed.   Due to Viorica’s intervention, many passengers were alive when the train reached it’s destination.  She was discharged from her job and was forced to move to Bucharest because of her act of rescue. Yad Vashem recognized Viorica Agarici as a Righteous Among the Nations on January 3, 1983.

The Romanian authorities, together with German soldiers, not only murdered thousands of Jewish residents of Iasi, but also sought to destroy an entire community that had existed for more than 300 years.  The Iasi Pogrom remains one of the most brutal pogroms carried out against Jews in history.  By studying this, students will be able to learn about the Holocaust in Romania.  Teachers should address relations between Jews and non-Jews in Iasi before WWII and have students compare relations after WWII.  Students may also debate or discuss the following topic:  What degree of responsibility did the Romanian authorities have in the murder of its’ Jewish citizens in Iasi?  How many Jews remain in Iasi now? Teachers can introduce the topic of rescue and have students examine the various forms of assistance and motivations of non-Jewish rescuers in their efforts to help Jews in Iasi.