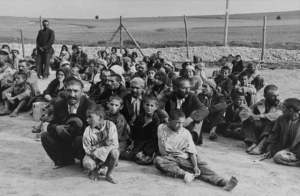 A group of Gypsy prisoners, awaiting instructions from their German captors, sit in an open area near the fence in the Belzec concentration camp. Poland, 1940. (This photo was taken prior to Belzec’s operation as a killing center.)
Photo courtesy of Archiwum Dokumentacji Mechanicznej Instytut Pamieci Narodowej.

On March 17, 1942, Belzec began operating as a killing center to murder en masse Jews, Poles, Roma (Gypsies), and Soviet prisoners of war using carbon monoxide gas. Belzec was the first of three camps, known as the Operation Reinhard camps. These camps (Belzec, Sobibor, and Treblinka) were modeled on the T4 euthanasia program in which carbon monoxide gas was used to kill mentally- and physically-handicapped people.

The camps were named for SS General Reinhard Heydrich, head of the Reich Security Main Office (RSHA) and chair of the Wannsee conference in January 1942. In the fall of 1941, the Nazis developed these secret camps as a solution to what they deemed the “Jewish Question,” the solution being to murder Jews within German-occupied or annexed territories. The RSHA was responsible for the deportation of European Jews to these killing centers.

The Operation Reinhard camps were located in the General Government. This area of German-occupied Poland included the districts of Radom, Warsaw, Lublin, Krakow, and, after the summer of 1941, Galicia. It did not include western regions of Poland that where annexed to Germany or eastern regions of Poland that were formerly occupied by the Soviet Union, other than Galicia.

Jews, Poles, Roma (Gypsies), and Soviet prisoners of war were transported to Belzec, Sobibor, and Treblinka. Upon arrival at the killing centers, the majority were sent to undressing stations and then to showers where they were murdered by carbon monoxide gas. Only a few who were deemed “fit” for labor in the Sonderkommandos, special units used for tasks such as burying and cremating the bodies of the dead, were spared.

From March 1942 until December 1942, Belzec was operational as a killing center. The labor camp Majdanek assisted Belzec with its killing operations during the fall of 1942. Sobibor functioned as a death camp from May 1942 until October 1943, while Treblinka served as a killing center from July 1942 until August 1943. More than one million Jews were murdered at the Operation Reinhard camps. Only an estimated 200 people who had managed to escape from the three killing centers survived the war. Most of those who survived escaped during uprisings at Sobibor and Treblinka.

Have students examine the gradual development of the killing centers. You can highlight how the majority of the Jewish community in Europe (other than in Hungary, Bulgaria, and Denmark) was murdered prior to the end of 1943. While many students may already know about Auschwitz, it is important for them to understand the history of the killing centers – institutions which were constructed for the sole purpose of killing human beings.