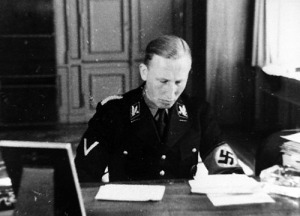 Reinhard Heydrich at his desk in Gestapo headquarters. Taken between 1933-1936.
(Photo courtesy of USHMM)

After joining the SS in 1931 at the age of 27, Reinhard Heydrich had a meteoric rise, taking on a range of responsibilities – and titles – within the Nazi state.   He became Himmler’s right-hand man and followed him up the echelons of power.  By 1936, Heydrich was head of the Security Police and the SD (the SS intelligence office), with jurisdiction over the SD, the Gestapo (political police), and Kripo (criminal police).  In January 1939, he took over the Reich Central Office for Jewish Emigration, and later that year, became Chief of the Reich Security Main Office, further concentrating his power.

Heydrich’s resume lengthened in 1941 with his involvement in the Holocaust and in governing conquered territories.  In July of that year, Goring charged him with the task of finding a “comprehensive solution to the Jewish problem.”  In January 1942, Heydrich presided over the Wannssee Conference, during which the implementation of the Final Solution was hashed out.  Heydrich traveled to the meeting from Prague, having also been named deputy Reich Protector of the Protectorate of Bohemia and Moravia (formerly part of Czechoslovakia), a role he took on in September 1941.

In many respects, Heydrich was the Aryan ideal.  He was tall, blond, and blue-eyed, with sharply chiseled features and a menacing demeanor.  With his cunning, consistency, and equanimity, he was also an effective Nazi leader.  He did not, however, possess the fanaticism that Himmler, Hitler, and others exhibited, and he had a pragmatic – albeit cold-blooded – approach to his work.  These qualities led Heydrich to enact extensive social measures in the Czech territories that he governed and to compensate the Czech people – to some degree – for the Nazis’ plunder of their resources.

Heydrich had the occupation authorities pay people according to their performance, and he made sure that basic commodities were available.  Such measures placated the population of Bohemia and Moravia, and as a result, angered the Czech government-in-exile in London.  Heydrich needed to be eliminated.

On May 27, 1942, Czech agents who had trained in England and parachuted into Czechoslovakia attacked Heydrich as his car traveled its daily route to his office.  He was severely wounded and died on June 4.  The Nazis staged an elaborate funeral in Berlin for the fallen leader.  The Gestapo and SS tracked down and killed the attackers as well as other resistance members and anyone suspected of being involved in Heydrich’s death – more than 1,000 people.  In addition, Hitler ordered the Czech mining village of Lidice to be liquidated as retaliation for Heydrich’s murder.  On June 9, 1942, German police and SD men shot all the men of Lidice and deported the women and children to concentration camps in Germany.  The village was then completely leveled.

The Nazis also honored Heydrich by naming their plan to murder the Jews of Poland Operation Reinhard.  Three extermination camps – Belzec, Sobibor, and Treblinka – were constructed to carry out Operation Reinhard, which came under the direction of SS and Police Leader in the Lublin district, Odilo Globocnik.

With your students, you may want to use Reinhard Heydrich as a case study in which one can examine several aspects of Holocaust history, including the evolution of the Nazis’ policies against the Jews, the key shifts in power among Nazi leaders, and the role of the German police forces in terrorizing local populations and implementing the Final Solution.