THE DEPORTATION OF ROMAN JEWS 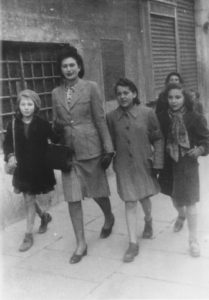 Hanna Rawicz (far right) walks along a street in Rome with friends during the period before she went into hiding in a convent.
(Courtesy of the United States Holocaust Memorial Museum Photo Archive)

At the start of the German occupation of northern and central Italy in early September 1943, there were approximately 12,000 Jews living in Rome.  In September 1943, the Germans reorganized occupied Italy into the Italian Social Republic under Mussolini, whom they released from prison and installed as the puppet leader of a pro-German government.  During the first few weeks of German occupation of Rome, the city felt few changes.  Dante Almansi, national president of the Union of Italian Jewish Communities, and Ugo Foa, president of the Jewish Community of Rome, refused to close the synagogue or reduce the number of services.

After signing a concordat with Nazi Germany in July 1933, Germany viewed the Vatican as a sovereign and neutral state.  Pope Pius never publically condoned the actions of the Germans nor did he sign the Allies’ declaration that condemned the extermination of Jews on December 7, 1942. However, many believe that the Pope’s Christmas address of 1942 may have been about the Jews, although they were not explicitly mentioned.

Throughout the month of September, Roman Jews decided what to do. Some arranged hiding spots with neighbors or within convents. Others created safe houses throughout the city filled with blankets and food.  Those who could left Italy. The Jews of Italy had heard the reports from Eastern Europe however, as Holocaust historian Susan Zuccotti explains, the Jews of Italy had faith in Mussolini and the Pope that they would be saved.  The majority of Roman citizens stayed within their homes.

The first German action against the Jews of Rome came in the form of a ransom. German Lieutenant Colonel Herbert Kappler gave the Jewish leaders Almansi and Foa 36 hours to collect 50 kilograms of gold. The gold was delivered on Tuesday, September 28th.  The Jews thought this was the end however, by mid October, the Germans sent issues to Rome ordering the deportation of all Jews to Auschwitz-Birkenau.  The roundups of the Jews of Rome began onOctober 16, 1943.

The Italian police refused to participate in the roundup and instead gave warning to many of the Jews within Rome. Many Italian Jews were able to go into hiding, mostly in Rome with the help of the Christian neighbors.  During the roundups, Christians pulled Jews into their homes and hid them for the duration of the roundup.  Jews were incorporated into school classes to avoid deportation.  Some historians have noted that the Vatican helped to spread warnings and hide Jews during this time.  Fewer than 1,100 Jews were deported from Rome due to the help of their Christian neighbors. Those deported were sent directly to Auschwitz-Birkenau. It is believed that only 15 of them survived. The Germans deported 8,564 Jews from Italy, Italian –occupied France, and the islands of Rhodes and Kos.  1,009 returned. In all, more than 40,000 Jews survived the Holocaust in Italy.  The Germans occupied Rome for nine months. It
was liberated by the American forces on June 4, 1944.

When discussing the deportation of Roman Jews with your students, consider the roles and actions of the Italian police and the Pope. How did their actions compare to institutions and leaders in other parts of Europe? What can we learn from the actions of the Italian citizens in helping their Jewish neighbors?