THE FEBRUARY STRIKE IN THE NETHERLANDS 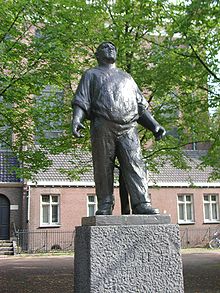 “The Dokwerker” memorial which recalls the February strike of 1941 designed by Mari Andriessen.
Commissioned in 1952, it is now situated on the Jonas Daniel Meijerplein.

Germany occupied the Netherlands on May 10, 1940. At that time the Jewish population of Amsterdam numbered 75,000. However, this increased to over 79,000 by 1941 due to an influx of foreign Jews who were fleeing occupation in their own native lands. The Jewish population represented less than 10 percent of the city’s population.

Almost 400 Jews were rounded up in Amsterdam on the weekend of February 22-23, 1941, after clashes between Dutch Nazis and Jews. They were first taken to Buchenwald and from there to Mauthausen where most were murdered.

In response to the round up, which shocked the population, the Dutch Communist Party urged the people of the Netherlands to strike. The strike lasted from February 25-26, 1941, and included Amsterdam residents as well as those from nearby cities. Factories, transportation systems, as well as most public services came to a standstill during the strike.  In a poster urging the public to strike, the Dutch Communist Party wrote: “These riots against the Jews represent an attack on all the laboring masses! They constitute the beginning of harsher enslavement and terrorism…Demand the immediate liberation of the interned Jews.” However, the Germans suppressed the strike on the morning of February 27, and in the processes, dissipated the Dutch Resistance movement.  After the strike ended, persecution against the Jews increased.

Dutch citizenry did not protest again on such a large scale. However, during the summer of 1942, Catholic churches organized a small protest after deportations to concentration camps began. In retaliation, the Germans began to deport Jews who had converted to Catholicism. Throughout the war, a few Dutch rescue groups worked to find shelter for Jews.  However, in September 1942 special units formed of Dutch collaborators who searched for Jews in hiding. In hopes of evading deportation, an estimated 25,000 Jews, including 4,500 children, went into hiding in Amsterdam. One-third of those were discovered. Deportations of Jews from the Netherlands began in the summer of 1942 and lasted through September 1944. During that time, 107,000 Jews were deported and murdered, mostly at Auschwitz and Sobibor. Only 5,200 survived.  Amsterdam was liberated in the spring of 1945 by Allied forces.

When examining the strike and protests in the Netherlands with your students, you might explore how geography played a role in the persecution and survival of the Jews. Why did Jews flee to Amsterdam? What were the Nazi authorities trying to accomplish and convey with their harsh retaliation against Jews for the February clashes and again after Catholic protests?  What message did the Nazi retaliation send to others who may have wanted to help the Jews?