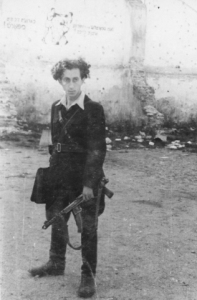 Once part of Poland, the city of Vilna became Soviet territory on September 19, 1939. At that time Vilna was home to 55,000 Jewish residents, as well as 15,000 Jewish refugees who fled Eastern Poland as a result of the German invasion of Poland. The city changed hands again three days after the German attack on the Soviet Union on June 22, 1941 (Operation Barbarossa), and was officially occupied by German forces.  That summer, the SS and Lithuanian collaborators began to murder Vilna’s Jews. Most Jews were killed in a wooded area, outside of the city, known as Ponary. On September 5, 1941, two ghettos were established in Vilna. The first held roughly 30,000 Jews who were able to work while the second held 9,000-11,000 Jews who could not work.

Many resistance movements organized inside of the Vilna ghetto.  On January 1, 1942 twenty-five year old Abba Kovner urged that the Jews fight against Hitler. He stated “Hitler plans to destroy the Jews of Europe, and the Jews of Lithuania have been chosen as the first in line. We will not be led like sheep to the slaughter! True, we are weak and defenseless, but the only reply to the murderer is revolt!”  Following this speech, the fractioned resistance group of the Vilna ghetto formed together to create the Fareynegte Partizaner Organizatsye, the FPO (United Partisan Organization).

The chief commanders, Kovner along with Yitzhak Wittenberg, led the organization in stealing weapons from Germans, warning other ghettos about the murders and trying to convince other ghettos to resist.  The Vilna ghetto fighters carried out sabotage against the Germans, including blowing up a German military train and damaging military equipment. They also created an illegal printing press to help spread news and awareness of the Vilna ghetto.
By July 1943, the Germans had learned about Wittenburg. They threatened to kill all 20,000 remaining Jews of the ghetto if Wittenberg was not turned over. Residents pressured the FPO, arguing that Wittenberg’s surrender was for the good of the community.  Eventually, Wittenberg turned himself in and committed suicide once in prison.

As the new commander of the FPO, Kovner continued the fight against the Germans throughout the summer and fall of 1943. On September 1, 1943, the German and local police units began rounding up Jews for deportation to Estonian labor camps.  The FPO organized and called for an uprising of the entire ghetto’s population. However, only one unit of the ghetto opened fire against the Germans.  As the ghetto started to be liquidated, Kovner along with hundreds of other members of the ghetto resistance movement escaped through sewers and other venues where they joined Soviet partisan moments in the forests. After liberation by the Soviet Union in 1944 less than 100 survivors returned to Vilna from Estonia.

Kovner survived the war and moved to Palestine, later Israel. He became a captain in the Israeli Defense Force and testified at Adolf Eichmann’s trail in 1961. He became a poet and wrote about his experience during the Holocaust as well as Israel’s War of Independence. He was awarded the Brenner Prize for literature in 1968 and the Israeli Prize for Literature in 1970. He passed away in Israel in 1987.

When talking with your students, consider discussing how timing and geography played a major role in the persecution of the Jews during the Holocaust. You may want to examine such topics as why the Jews fled to Vilna from Poland; why the Vilna ghetto was established later than Warsaw; and the similarities between the Warsaw ghetto uprising and the resistance movement in the Vilna ghetto.