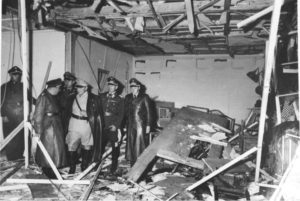 The bunker (Wolf’s Lair) lies in ruins after the failed assassination attempt of Hitler.

Every year in the decade preceding Hitler’s suicide in 1945, there was at least one attempt on the Führer’s life.  A nearly successful one was planned and carried out by Colonel Claus Schenk von Stauffenberg, a senior Nazi military official, in July 1944.  Stauffenberg enlisted the help of other military officials, former politicians, and diplomats.  The group’s decision to assassinate Hitler was rooted in their political and moral rejection of the war and in their belief that Hitler was unqualified to lead Germany.

After killing Hitler, the conspirators planned to assume power in the Reich, arrest the Nazi leadership, restore basic freedoms to the German people, and take control of the concentration camps.

After delays in initiating the plan, the group sprang into action on July 20, 1944.  A war meeting was scheduled for that day in the bunker under the Wolfsschanze (Wolf’s Lair) headquarters in East Prussia.  Before the meeting began, Stauffenberg brought in a bomb hidden in a briefcase and placed it on the floor near Hitler’s seat.  It was an unusually hot day, however, and the meeting was held above ground rather than in the bunker.  The bomb detonated and four people were killed, but Hitler survived unscathed.

Stauffenberg had left the Wolf’s Lair immediately after planting the briefcase.  With the assumption that he had killed Hitler, Stauffenberg flew to Berlin to meet military leaders Erwin von Witzleben, Ludwig Beck, and Friedrich Fromm, among others.  However, when the news broke that Hitler had survived, the conspirators abandoned their plans to take control of the government.  In an attempt to protect himself, Fromm arranged the execution of Stauffenberg and two others involved in the assassination plot.  Over the next few months, those loyal to Hitler arrested hundreds of officers suspected of being traitors.  Most participants in the attempted coup, including von Witzleben, Beck, and Fromm, were eventually executed or forced to commit suicide.  Ultimately, more than four thousand Germans were executed in the aftermath of the failed assassination attempt.

Like other instances of resistance, the July plot to kill Hitler reminds us that German opposition to the Nazi regime and its policies did exist and that it was manifested in a range of ways.  To be sure, Hitler’s government was popular with most German citizens.  However, you might discuss the assassination attempt when exploring the violent, totalitarian nature of the Nazi government and the related fact that acts of defiance nonetheless took place.