THE CAPTURE OF HANNAH SZENES 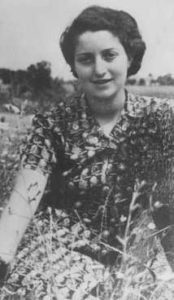 Seventy years ago, in June 1944, Hannah Szenes (pronounced Senesh) was captured in Hungary by the Germans. She was part of a group of young Jews living in Palestine who volunteered to serve in the British military during World War II.  Hannah joined a select unit of Jews who had emigrated from Europe to Palestine whose goal was to parachute into Nazi-occupied Europe to aid Jews escaping violence, assist with local resistance, and rescue Allied soldiers. This unit utilized parachutists who would be familiar with the language and terrain of areas in which they would dropped.

Hannah Szenes was born on July 17, 1921, in Budapest, Hungary. She was the daughter of the well-known journalist and playwright Bela Szenes. In 1939, Hannah moved by herself to Palestine. In Palestine, she continued her studies and wrote poetry.  As news reached Palestine about the deteriorating situation of Jews in Europe, Hannah decided she needed to do something.

She joined approximately 250 Jewish volunteers from Palestine for parachute training with the British army. Less than half completed the training and only thirty-seven men and women were deployed into Europe via parachute or other methods. They were sent to Yugoslavia, Romania, northern Italy, Slovakia, Hungary, Bulgaria, France, and Austria.

On March 14, 1944, Hannah, one of the few women to complete training, parachuted into Yugoslavia. Her goal was to get to Hungary but several days later the Germans invaded it. She spent the next three months working with Tito’s Yugoslav partisans. By June, she reached the Hungarian border during the height of Jewish deportations from Hungary.

After Hannah crossed into Hungary with her British radio transmitter, she was captured by the Germans. They tortured and imprisoned her to get the code for her radio transmitter. Her mother, who had remained in Budapest, was arrested in an effort to force Hannah to help the Germans. While her mother was released in September 1944, Hannah continued to be imprisoned. She was tried for treason against Hungary. Hannah was executed by firing squad on November 7, 1944, at the age of twenty-three.

After the war, Hannah’s remains were interred in Israel’s National Military Cemetery overlooking Jerusalem. Hannah Szenes is widely revered throughout Israel for her poetry and her bravery during the war.

Hannah wrote the following poem on May 2, 1944, in Sardice, Yugoslavia after she made the decision to enter Hungary despite the German invasion. She documented her life experiences through writings and photographs.

The unique story of Hannah Szenes draws many connections to the classroom. She is an example of how women participated in various ways to resist the Nazis. She is also part of the larger story of Jewish resistance.  It is important to note that her resistance took place during 1944, the year in which half of Hungary’s Jewish population was murdered. Her poetry can be used as part of a discussion on Holocaust literature, reflecting how art forms are utilized to express life experiences.