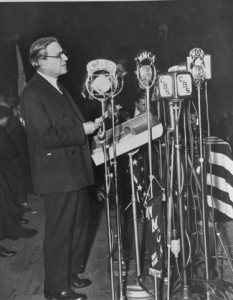 News of the murder of Jews in Europe had been gaining slow acknowledgment within the US media. The New York Times reported in October 1941 that an estimated 15,000 Jews had been murdered in Galicia. The Riegner cable of 1942 reported that the Nazis were planning to murder all the Jews of Europe and made specific reference to the actions at Auschwitz-Birkenau. Yet, there was little success in increasing public support for rescue efforts in Europe. In December 1942, the American Jewish Congress (AJC), led by Rabbi Stephen S. Wise, created a Planning Committee, whose purpose was to suggest and implement rescue proposals for European Jewry.

The AJC staged rallies throughout the United States. Rabbi Wise wanted to increase public awareness in the United States and urge America to support rescue efforts in Europe. In May 1933, Wise had been joined by 100,000 people in Battery Park, New York, to protest Nazi persecution and the same month he addressed 10,000 people in Cleveland, Ohio. The most successful of his rallies occurred on March 1, 1943, at Madison Square Garden in New York City. Reaching past capacity, only 20,000 of the 70,000 protestors were allowed inside Madison Square Garden. This sparked a series of smaller rallies throughout the United States.

Wise hoped to use the momentum of the March 1 rally to gain political headway with President Roosevelt. However, Roosevelt’s response to Wise’s inquiry was vague: “This government has moved and continues to move, so far as the burden of the war permits, to help the victims of the Nazi doctrines of racial, religious and political oppression.”  In time, Roosevelt did create the War Refugee Board in January 1944 after a report outlining America’s obstruction of rescue gained popularity.