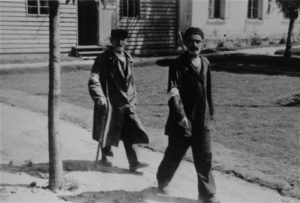 On November 23, 1939, the Nazi government issued a law stating that all Jewish Poles in German occupied Poland who were over the age of ten must wear armbands with blue Stars of David on them. Between 1939 and 1941 Jews throughout German-occupied Eastern Europe were forced to wear distinguishing marks, such as armbands or yellow star badges.  Different badges were used during the Holocaust period to identify Jews. Further distinctions on badges were made in some of the ghettos for members of the Jewish police, the Jewish Councils (or Judenräte), and doctors.

It was generally the responsibility of the Jews to purchase, create, and distribute the badges. If caught without a badge in areas where they were obliged to wear it, Jews could be fined, imprisoned, or shot. The Nazi policy of forcing Jews to wear badges isolated the Jews from the larger population. It aimed at humiliating the Jews by labeling them as ‘other’ and allowed for targeted public harassment of Jews.

The German authorities were not the first to require Jews to wear a distinguishing symbol. During the Middle Ages, Jews throughout Europe were forced to wear different forms of markings to set them apart. By the end of the eighteenth century, following Jewish emancipation in most European countries, these orders ceased. The idea was not reintroduced until Reinhard Heydrich, chief of the Reich Security Main office, suggested it in the days following the 1938 November Pogrom in Germany and Austria. Though the policy was not implemented until late 1939, once it was, it quickly spread to areas of almost every country that Nazi Germany occupied including Slovakia, Romania, Hungary, Belgium, the Netherlands and occupied France. Due to fierce opposition, the policy was never implemented in Denmark.

Jews and some non-Jews reacted to the law throughout Europe. In France, the French police did not enforce the law and many non-Jewish residents wore a star in solidarity with the Jews. In Holland, an underground newspaper printed “Jews and non-Jews are one and the same” on 300,000 stars.

When discussing the implementation of the star badges with your students, encourage them to consider the purpose and effects of the markings. What were Nazi authorities trying to accomplish? How might this policy have affected those who were forced to wear such badges?