THE REVOLT OF THE AUSCHWITZ SONDERKOMMANDO 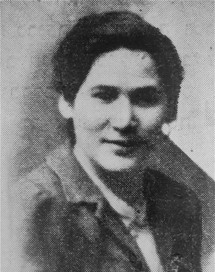 Sonderkommandos were “special” work units comprised of Jewish death camp prisoners who were forced to aid with the disposal of the bodies of gas chamber victims, among other tasks. Various Sonderkommando units within Auschwitz were charged with directing prisoners to the gas chambers, searching the dead for valuables after gassing, removing the bodies from the gas chambers, and later disposing of the bodies in the crematorium. Because of their position within the camp, the Sonderkommando were allotted greater rations and better lodging for the duration of their imprisonment. However, because members of the Sonderkommando had direct knowledge of the barbarity of the crimes the Nazis committed, they were routinely executed and replaced with new prisoners.

During the summer of 1944, members of the Sonderkommando had made contact with female prisoners working in a munitions factory near the Auschwitz camp. For months, women who worked in the factory stole small amounts of gunpowder and smuggled it to Róza Robota (pictured above), a member of the underground resistance, who subsequently passed it to her co-conspirators in the Sonderkommando. On October 7, 1944, Auschwitz underground leaders warned the resistance cadre at the crematoria that the SS were planning to liquidate theSonderkommando. This news was confirmed later in the day when a senior Sonderkommandomember was ordered to prepare a list of 300 prisoners for “evacuation.” Instead of facing certain death, members of the Sonderkommando revolted, blowing up crematoria IV and killing several SS guards. The Sonderkommando of crematoria II joined the revolt, cut the barbed wire fence, and attempted to escape Auschwitz.

All of the prisoners who participated in the Sonderkommando revolt were killed, either during the uprising or afterwards as punishment. A total of 451 prisoners lost their lives that day. Róza Robota and three other women who supplied gunpowder from the munitions factory were hung on January 6, 1945, just a few weeks before the camp’s liberation. Zalman Gradowski, one of the fighters in the Sonderkommando, wrote about the planned action and buried the document in the ground near the crematoria:

Dear finder, search every part of the ground. Buried in it are dozens of documents of others, and mine, which shed light on everything that happened here…As for us, we have already lost hope…The future will judge us on the basis of this evidence. May the world understand some small part of the tragic world in which we lived. (September 6, 1944)

If you teach to this topic you may want to explore the obstacles the Sonderkommando faced in mounting the revolt.