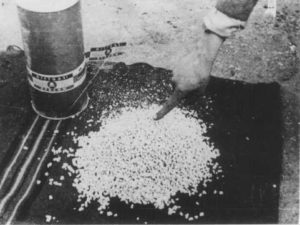 Zyklon B, also known as hydrogen cyanide, was a highly poisonous cyanic gas that was originally used as an insecticide and was later utilized to gas Nazi victims during the Holocaust. Initially, during the so-called euthanasia program and the start of Aktion Reinhard, the Germans used carbon monoxide in gas vans and sealed rooms at Chelmno, Belzec, Sobibor, and Treblinka for killing purposes. After the initiation of Aktion Reinhard, it was determined that the current Nazi method of killing was unsuitable for the number of people that were to be killed at Auschwitz. Rudölf Hess and Adolf Eichmann were charged with finding a more efficient method of killing large amounts of people, on a scale greater than had previously been seen.

On September 3, 1941, the Nazis carried out an experiment on a group of 600 Russian prisoners of war and 250 ill Polish prisoners to determine the effectiveness of Zyklon B. Auschwitz-Birkenau already had large quantities of the gas for fumigation purposes, and the experiment was designed to prove whether this gas could be manipulated and used effectively for large-scale killing. The experiment proved successful, and Zyklon B was henceforth used for the gassing of Jews and other victims for the duration of the war.

The manufacture of Zyklon B was handled by a firm called Degesch, a subsidiary of I.G. Farben, and by the Tesch and Stabenow Company. These firms delivered Zyklon B to the camps in crystal pellet form. As soon as the pellets were exposed to air they turned into poisonous gas. A guard equipped with a gas mask would empty the crystals into the tightly packed gas chambers through a small opening. Within twenty minutes, all the victims in the chamber were dead.

At the height of deportations to Auschwitz-Birkenau in 1944, there were days when thousands of Jews were gassed en masse. By the end of the wars, hundreds of thousands of people were killed using Zyklon B.

When teaching to this topic, you may wish to explore the various modalities employed by the Germans for killing Jews and other victims. As part of this discussion you might want to look at the evolution of the killing process.