THE RESCUE OF THE DANISH JEWS 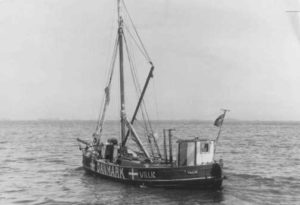 Rescue of the Danish JewsThe German aktion to round up the Jews in Denmark was slated to begin on October 1,1943, the Jewish New Year. When the Germans began to arrest Jews in Denmark, to their surprise, few could be found. Although the Nazis attempted to implement the “Final Solution,” resistance by government officials, Danish citizens, including Danish police who refused to participate in the arrests and deportations, resulted in the rescue of most of the 7,500 Jews living in Denmark.

The Germans invaded Denmark on April 9, 1940, and occupied the country until 1945. The severity of occupation was often determined in part by how Nazi Germany perceived the “racial” worth of the country. The Danes were viewed as almost pure “Aryan” and were granted a level of autonomy that did not exist in other countries under German occupation. As a result, the Danish military and government, except the foreign affairs office, stayed under Danish control until 1943.

Unlike other occupied countries, Jews were not forced into ghettos or to wear a yellow star. Although the story of the Danish King Christian X wearing a yellow star is a myth, he did support the Jewish community. In contrast to other political leaders on the European continent, he did not flee to England. Instead, he stayed in the country to rally his people and was often seen riding through the streets of Copenhagen on horseback. As the Danish underground increased its sabotage efforts, the Germans retaliated with stricter measures, such as a ban against strikes and public protests, a curfew, and press censorship. On August 28, 1943, German officials declared martial law, prompting the Danish government to resign in protest.

The Germans disarmed the Danish military and took prominent Danish intellectuals, government officials, and leaders of the Jewish community hostage. On September 28, 1943, Georg Ferdinand Duckwitz, the German naval attaché who would later be honored as Righteous Among the Nations, alerted Danish government leaders of German plans to begin the deportation of the Jews. He had been informed by SS General Werner Best, the civilian administrator who had initially proposed the deportation to Hitler. Danish leaders then informed leaders of the Jewish community. The acting chief rabbi of Denmark, Rabbi Marcus Melchior, entered the Great Synagogue in Copenhagen on September 29 and announced that a German aktion was pending. He recommended that everyone leave, go into hiding, and warn others.

The Bishop of Copenhagen, head of the Danish Lutheran Church, issued a declaration to be read from pulpits across Denmark encouraging Danes to help their Jewish countrymen. After influential Danes mobilized Swedish support and negotiated with Swedish leaders, the Swedish press made an announcement on October 2, 1943, that the country would accept Danish refugees, including Jews. An extensive effort began to smuggle Jews to neutral Sweden. In response, universities closed to enable students to assist with rescue efforts. Over the next three weeks, Danish fisherman, primarily coordinated by the underground and typically compensated either by Danish donations or the Jews themselves, ferried about 7,200 Jews and nearly 700 non-Jewish family members to safety in Sweden.

The rescue of the Danish Jews shines as a spark of light amidst the darkness. To highlight this remarkable act of humanity you may prompt students to discuss why the Danes were willing and able to mount a major rescue effort, and how this compares with rescue in other countries. Consider the role geography played in these successful rescue efforts. Students might also compare and contrast the severity of the German occupation in different territories and the treatment and survival of the Jews in each. For further suggested approaches, download the JFR’s free Danish Rescue Unit of Study.