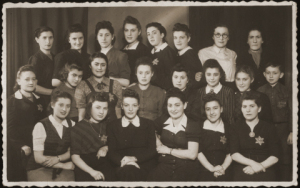 On September 1, 1941, the Nazi regime decreed that all Jews in Germany over the age of six must wear a yellow star. This decree was meant to facilitate the racial identification of Jews, and it was highly effective. A Jew found without a badge was subject to fines, imprisonment, and death by shooting. The isolation, humiliation, and separation forced upon the Jews by the so-called “Jewish badges” make this decree a clear example of the nature of Jewish life under the Third Reich.

Although the proposal to create an official Jewish sign was not introduced until November 1938, the practice existed in ancient times when Jews were forced to wear specific clothing colors and shapes to distinguish them from the rest of the population. Following Kristallnacht – the Night of Broken Glass – Reinhard Heydrich, the second in command of the SS, proposed the promulgation of the badges.

The first Jews to be marked were those of Poland; in November 1939, local governments in Polish cities and towns began requiring Jewish badges. By December 1, 1939, all Jews over the age of twelve in the Generalgouvernement, the section of German-occupied Poland not incorporated in the Reich, were wearing an identifying white armband with a blue Star of David. The laws ordering Jews to wear such badges spread throughout German-occupied countries and eventually reached Germany itself on September 1, 1941. Jews within the Reich were required to wear a yellow six-pointed star, four inches high, on the left side of their chests and on their backs.

In German-occupied countries in Western Europe, there was some opposition to the badge decrees. The implementation of the badges in France, for example, was delayed because of resistance by the French people and on the part of the Vichy regime in unoccupied France. However, the decree was finally announced in France on June 7, 1942. The story of King Christian X of Denmark wearing the badge is completely fictional. However, the Germans knew that the Danes were resistant to any anti-Jewish measures, and the Jewish badges were never implemented in Denmark.

These decrees are important to remember in teaching the Holocaust because they show the gradual implementation of the Final Solution, the importance to the Nazis of both racial law and separation, and the possibility of resistance. In some countries, the stars were symbols of degradation and isolation. In some others, however, opposition to the badge and other anti-Jewish measures highlights the power of popular resistance.