THE “ARYANIZATION” OF JEWISH PROPERTY 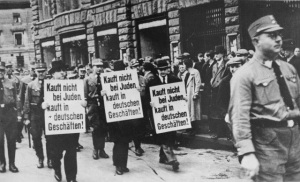 Jewish businessmen are paraded down a street in Leipzig, carrying signs that read: “Don’t buy from Jews; Shop at German stores!”
(Courtesy of the USHMM Photo Archives)

On December 3, 1938, Germany mandated the compulsory “Aryanization” of Jewish property. This process was part of the legislation announced by Hermann Goering directly after Kristallnacht (November 9-10, 1938) in his plan to remove the Jews from the German economy. During the November Pogrom, as it is also known, the Germans legitimized the looting and destruction of Jewish property and confiscated the insurance money paid to Jews as compensation for the damage.

The “Aryanization” laws deprived Jews of their assets and their income-earning capacity. The regulations prohibited all independent economic activity by Jews, thereby rendering most Jewish professionals jobless. Businesses were incorporated into a government-appointed trust that charged the Jewish owners an exorbitant fee that amounted to a large portion of the selling price.

This December ruling was the most rapid and extreme stage of “Aryanization.” Sixty to seventy percent of Jewish property, however, had been appropriated by the Germans before the law was enacted. This first stage began in April 1933 with the German dismissal of non-Aryans from the civil service. This condition was later applied to self-employed doctors and lawyers.

The assault on Jewish enterprises took the form of boycotts and intimidation, and violence was rampant, often orchestrated by Nazi officials. Non-Jewish Germans who patronized Jewish stores were photographed and included on lists of “traitors” printed in local newspapers and posted on billboards. Occasionally, uniformed officers stood outside Jewish stores threatening potential customers and barring their entrance. Jewish property owners were physically attacked and sometimes sent to concentration camps as a means of forcing them to sell their businesses at a fraction of their value.

The effort to exclude the Jews from the economic life of Germany continued throughout the war. Those Jews who emigrated were forced to turn over the bulk of their assets to the German authorities before leaving the country. When German Jews were deported to concentration camps, the Reich seized their property. Although this money was earmarked for the Reich Treasury, much of it was used by the regime to finance the “Final Solution.”

In discussing Aryanization, it is important to emphasize the tangible consequences it had on the Jews, but also the social and psychological ones. The loss of property and income-earning capacity dehumanized the Jews, ended work relationships, strained family relationships, and sent the message that Jews had no place in German society. Looking at Aryanization is crucial in understanding the progression of measures taken against the Jews.