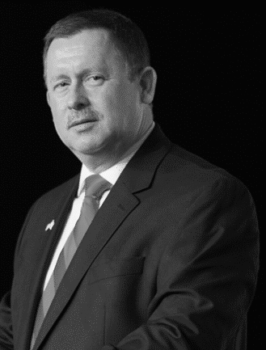 Pastor and son of Roddie Edmonds

Pastor Chris is a sought after speaker and leader who recently retired as Senior Pastor of Piney Grove Baptist Church in Maryville, Tennessee, Pastor Chris works to extend his father’s legacy of choosing good, opposing hate, dignifying life, and expressing love to all. He is a Senior Professional in Human Resources with a business graduate from the University of Tennessee. Pastor Chris also holds a Master of Arts in Religion from Liberty Theological Seminary. He and his high school sweetheart Regina are blessed with three amazing daughters and son-in-laws, and seven of the coolest grandchildren on the planet.

As founder of Roddie’s Code, Pastor Chris is committed to extend the legacy and leadership of Sergeant Edmonds by inspiring heroes everywhere to enjoy life, express love, and embrace God above. In the style of a southern preacher, Pastor Chris calls everyone to live by Roddie’s Code by choosing right, opposing wrong, dignifying life, and esteeming everyone. Sergeant Edmonds incredible story and Chris’ improbable journey to discover it is inspiring millions of ordinary people to do what’s right for others and be the hero.

Pastor Chris Edmonds is committed to extend the legacy and leadership of Sergeant Roddie Edmonds by inspiring heroes everywhere to enjoy life, express love, and embrace God above