This month the JFR recommends The Pope and Mussolini: The Secret History of Pius XI and the Rise of Fascism in Europe by David Kertzer. It was reviewed in USA Today by Matt Damsket in February 2014.The review reads: 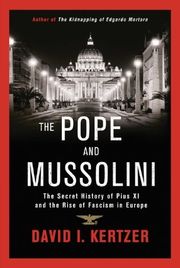 “If 20th-century fascism could be reduced to a coin, heads would be Hitler, tails Mussolini. Twinned in a twisted ideology of geopolitical domination and racial extermination, these tyrants did their worst to steep civilization in a war that benighted Europe and redrew the physical and psychic map of the world…
But as Brown University professor David I. Kertzer makes clear in The Pope and Mussolini, his vividly recounted history, the rise of Italian fascism is a tale of a very different partnering than that of Il Duce and Der Führer. Instead, Kertzer portrays the alliance of Mussolini and Pope Pius XI. Both came to power in 1922, when the destiny of Europe, still reeling after World War I, was unforeseeable, and fascism was viewed as a form of authoritarianism that had its practical advantage for a nation seeking political order and a church that had fallen from its height of influence.

Importantly, Kertzer had access to recently opened Vatican archives regarding Pius XI, and his thorough research goes a long way in overturning conventional notions about Catholic church resistance to Mussolini. If anything, it’s a tragic story of a pope’s too-late realization that Hitler’s and Mussolini’s pagan tide of anti-Semitism had drowned any rationale for church support.

The complex history of the Vatican’s role during the Holocaust – and especially the debated history of Pius XI’s successor, Pius XII, who assumed the papacy in 1939, on the eve of Hitler’s push toward war – is the shadow that overhangs this book. Kertzer shows how the church’s accommodation with Mussolini in the 1920s and ’30s helped pave the way for the fascist nightmare Pius XI would regret on his deathbed.”