This month The Jewish Foundation for the Righteous (JFR) recommends In the Garden of Beasts: Love, Terror, and an American Family in Hitler’s Berlin, by Erik Larson. The book was reviewed by John Barron for The Chicago Sun Times.  The review follows: 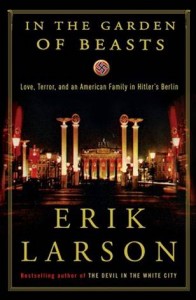 In the Garden of Beasts is a dazzling amalgam of reportage, historical digging and narrative drive that casts an eerie new light on the long prelude to World War II.

In 1933, William E. Dodd, a longtime history professor at the University of Chicago, was casually casting about for a new sinecure. Pulling some strings with connections in the new Roosevelt administration, he made his interests known. At the time, the president struggled filling the ambassadorship to Germany. There were few takers for a post clouded by Germany’s immense debt to the United States, the unknowns surrounding Hitler and the country’s troubling obsession with “the Jewish question.” Surprisingly, Dodd got the nod.

Working from manuscripts, diaries and letters, Larson charts the almost day-by-day experiences of this strange brood in a very strange period. At first, the Dodds — like many in Germany — tried to give the new regime the benefit of the doubt. The attitude most adopted was along the lines of, “Once the dust settles, they surely can’t be all that bad.” Larson’s study reads like a suspense novel, replete with colorful characters, both familiar and those previously relegated to the shadows. “The Imp of the Perverse.” Ambassador Dodd witnessed its unleashing. The world would be forced to endure it.