This month The Jewish Foundation for the Righteous (JFR) recommends Resistance: Jews and Christians Who Defied the Nazi Terror by Nechama Tec. Neal Gendler’s review in the American Jewish World reads: 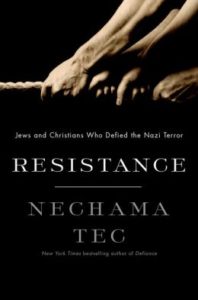 “In Resistance, her latest book about struggles to thwart Nazi annihilation, Nechama Tec says couriers — most of them women — were among the least-acclaimed resistance fighters despite roles so dangerous that few lived out the war.
“Jewish female couriers functioned as the glue that held an underground together,” Tec says. They carried information, documents and goods, and they guided people in, out and between ghettos, and to and from resistance units in Eastern Europe’s dense forests.

Women, particularly those who didn’t “look Jewish,” were preferred couriers, their presence on the streets attracting less suspicion than would men; able sometimes to flirt or charm their way out of tight spots and, of course, not bearing the giveaway of circumcision…

Resistance requires effective leadership, a steady supply of arms, an appropriate topography and a cooperative populace, Tec says. Jews who escaped to the East’s huge forests had little trained leadership, no sponsor for arms and scant local support. They were in danger not only from Germans, but also from Jew-hating resistance groups and locals who were rewarded for betraying Jews.

Tec says questions and assumptions about Jewish responses need clarification “through systematic, comparative examinations of historical facts.” She does so well, organizing the result into chapters on “learning how to oppose,” ghettos, concentration and death camps, resisters in forests, couriers, and a chapter on Jan Karski, the devout Polish Catholic who brought the West detailed information of German annihilationist practices in futile hope of a specific response.

She provides vivid pictures of each of those situations via well-chosen accounts from Jewish participants, both living and the dead who left records — particularly the detailed archive hidden by Warsaw’s Emanuel Ringelblum. She says Jewish resistance had two motives: revenge and saving lives. The Bielski brothers combined those, creating a “family camp” of 1,200 Jews…

Resistance provides new information and important services of categorization and consolidation. It’s an excellent, economical overview of resistance in the East. It puts the lie to ignorant or hateful allegations of Jewish passivity, and is a valuable education for gentiles and the large numbers of Jews too young to have grown up in the shadow of the Shoah.”