This month the JFR recommends Holocaust in Rovno: The Massacre at Sosenki Forest, November 1941 by Jeffrey Burds. 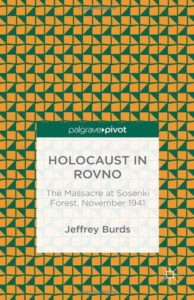 Over three days in November 1941, in Sosenki Forest outside the city of Rovno, Ukraine, German death squads supported by local collaborationists murdered some 23,500 Jewish men, women, and children. Often remembered as “the second Babi Yar,” the massacre was one of nearly a hundred similar German-sponsored, large-scale, anti-Jewish killing operations perpetrated in Soviet zones during the early months of World War II on the Eastern Front. Preceding the adoption of the “Final Solution” by the Third Reich, Rovno and other mass killings in the East were testing grounds for genocide. This study of the Rovno massacre is based substantially on remarkable new research that blends sources from multiple archives (and archival traditions), national memories, and first-person testimony that places victims’ accounts side-by-side with those of German, Polish, Ukrainian, and Russian eyewitnesses. In its meticulous reconstruction of these events, The Holocaust in Rovno exemplifies the burgeoning movement to form a genuinely transnational history of the Holocaust.