This month The Jewish Foundation for the Righteous (JFR) recommends Isaac’s Army: A Story of Courage and Survival in Nazi-Occupied Poland, by Matthew Brzezinski. The book was reviewed by Scott Waxman for Publishers Weekly. 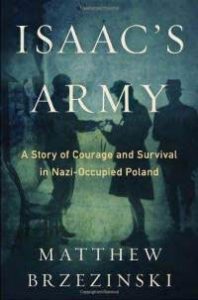 “The Warsaw Ghetto uprising of April–May 1943 was the largest Jewish revolt during WWII. As Brzezinski (Red Moon Rising) relates in this revisionist history of the uprising, the Jewish Fighting Organization, comprising young Polish Jews of disparate political affiliations, played a dominant role. Isaac Zuckerman, a charismatic prewar Zionist youth leader, was the organization’s cofounder and driving force. When the uprising erupted, Zuckerman was on the “Aryan” side of Warsaw procuring weapons, and organized the escape of the surviving fighters through the sewers. Zivia Lubetkin—shy but methodical—ran a network of couriers to maintain links among various ghettos. Significantly, the organization’s 23-year-old leader, Mordechai Anielewicz, now widely viewed as the uprising’s hero, is disparaged by Brzezinski as a dangerous hothead who returned to Warsaw at the last minute to steal center stage in the organization and who, according to other fighters, took the easy way out with his suicide in a bunker together with 80 comrades in arms. Drawing on Zuckerman’s memoir and interviews with some survivors, this is overall a taut and worthy retelling of the uprising with welcome backgrounds on its significant members, including the less known Jewish Military Union of right-wing Zionists. Brzezinski’s treatment of Anielewicz will be controversial.”