This month The JFR recommends Governments-In-Exile and the Jews during the Second World War edited by Jan Lanicek and James Jordan.  It can be found in the Autumn/Winter 2012 edition of Holocaust Studies: A Journal of Culture and History. The preface states: 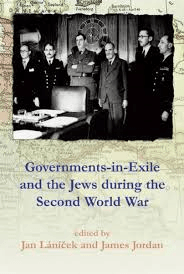 “In March 2010, the Parkes Institute for the Study of Jewish/non- Jewish Relations at the University of Southampton convened a two-day international academic conference on ‘Governments-in-exile and the Jews during the Second World War’. This fruitful event, made possible thanks to the generous financial support of the University of Southampton, Vallentine Mitchell and the  Fondation pour la Mémoire de la Shoah, brought together 18 scholars from Europe (including Belgium, Germany, Luxemburg, the Netherlands, Poland, Serbia and the United Kingdom), Israel and the United States. The aim of the conference was to present a global and connected perspective on the Jewish policies of various governments-in-exile established during the war in London and elsewhere, a specific and relatively neglected area of Holocaust research. Whilst the subject of bystanders to the Holocaust has constituted an important part of Holocaust research in the last decades, historians have focused mainly on the two major Western Allied powers: the United States and the United Kingdom. There has not been any comprehensive investigation of how the other members of the anti-Hitler alliance helped to shape the attitudes and responses to the Nazi persecution and extermination of European Jewry. The conference sought to redress this by addressing several key issues in relation to the Exiles and their conduct during and after the war, documenting the complexity of the influences at play and highlighting the importance of the theme for the broadening of Holocaust historiography. This included the comparative examination of the policies of the governments-in-exile, the actions they actually took (including attempts, if there were any, to impact on initiatives by the Western Allies for the rescue of Jews), and the factors that shaped their policies and actions, including the role played by the main national underground organizations that informed the governments-in-exile about the sentiments among the populations at home. Across Nazi-occupied Europe the harsh German occupation regime triggered a resurgence in nationalism that tended to exclude groups seen as foreign, and this often meant the Jews as well.”