This month The Jewish Foundation for the Righteous (JFR) recommends Collect and Record!: Jewish Holocaust Documentation in Early Postwar Europe, by Laura Jockusch. This book won the 2012 National Jewish Book Award in Holocaust. 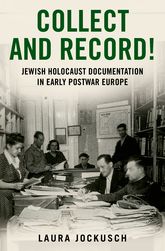 This book tells the story of Jewish survivors who pioneered Holocaust research in the immediate aftermath of World War II. Just liberated from Nazi terror, amidst political turmoil and privation, physically exhausted and traumatized women and men founded historical commissions and documentation centers throughout Europe to chronicle the Nazi Final Solution. By comparing the cases of France, Poland, and the Displaced Persons camps in Allied-occupied Germany, Austria, and Italy, the book explores the motivations and methods which guided survivors in compiling archives of tens of thousands of Nazi documents, eyewitness accounts and questionnaires, ghetto and camp literature, wartime diaries, and artifacts, and in publishing dozens of historical works. Its comparative method illuminates the transnational dimension of Jewish Holocaust research and its place within the larger context of twentieth-century Jewish historiography. It argues that these documentation initiatives not only perpetuated certain Jewish cultural traditions of history writing and memory that predated the Holocaust but that collecting, recording, and researching the Jewish catastrophe had a vital function in survivors’ posttraumatic recovery. In their use of victim and perpetrator sources and social-science-oriented research methods and their focus on the history of the everyday life and death of the Jews in Nazi-occupied Europe, the Jewish historical commissions and documentation centers anticipated methodological questions and debates over the use of victim testimony and the writing of history “from below” which entered academic Holocaust historiography only toward the end of the twentieth century. It also takes issue with the widespread misconception that all Holocaust testimony was belated, due to survivors’ decades-long silence, and that systematic Holocaust historiography began only with the 1960s.