This month The Jewish Foundation for the Righteous (JFR) recommends The Family by David Laskin. It was reviewed in the Wall Street Journal by Edward Kosner in October 2013. The review reads: 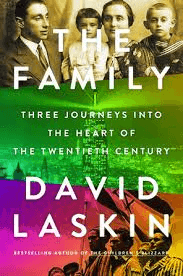 “The modern history of the Jews is encompassed in the saga of one family spread across Europe, the U.S. and Israel…
The story begins in 1835 with the birth of Mr. Laskin’s great-great-grandfather in the forlorn shtetl of Volozhin in the Pale of Settlement on Russia’s western edge. It ends in the second decade of the 21st century with 101 descendants in America, 32 in Israel and only a few gravestones left in Europe. In between are tales of piety amid privation, immigrant courage and industry, Zionist pioneering, Nazi brutality, and the precarious salvation of the Jewish people….

The success of the American branch of the family is all but eclipsed by the destruction of those who chose to stay in Europe or waited too long to try to escape. Shalom agonized in America as news dribbled out of the Nazi extermination of millions of Polish, Russian and other Jews. After the war, he learned the full horror of the slaughter of his people—the machine-gunning, gassing and conflagrations in synagogues and yeshivas with Jews locked inside, the death pits…
Mr. Laskin recounts atrocities in the same simple, almost folkloric prose that he uses to tell the rest of his story. He writes at one point of the 1942 assault on the ghetto in Vilna, once “the Jerusalem of Lithuania”: “The killing had stopped. The old, sick, and disabled, the strong, healthy, and male—and plenty of others besides—were already dead.”  And before the ultimate annihilation, he painstakingly describes the humiliation and abuse of the Jews under the Romanov czars in Russia, the anti-Semitic Poles, Cossack marauders, and all the others who drove them to flee to America and Palestine before the Nazis’ Final Solution.

“The Family” is a very emotional book. It has no overt message, but the lesson of its narrative is hard to miss: The survival of the Jews has hinged in some sense on the establishment of the state of Israel. Yet it is the U.S. that has given the Jewish people the secure homeland they have sought since the destruction of the Temple, where Mr. Laskin’s ancestors may well have been inking in Torah passages in days lost to memory.”