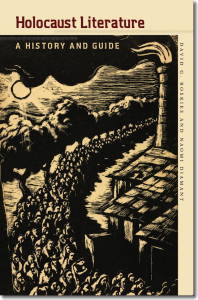 “In the preface to Holocaust Literature: A History and Guide (Brandeis University Press), which he co-wrote with Naomi Diamant, David Roskies recalls a variety of Holocaust commemorations from his Montreal adolescence…

Roskies notes that this trajectory took him “from intense to attenuated group memory, from group memory divided along regional, ethnic, religious, and ideological lines to a zero-sum memory pool. I had moved from public remembering to public forgetting. At one end of the spectrum a culture of mourning was being incubated…. At the other end, an invitation was extended to join the majority culture…. From age fifteen to seventeen, in short, I had personally relived the jagged history of Holocaust literature.”

…This autobiographical account also presages key points in the new book. ‘It did not take a generation for a literary response to the Holocaust to be born,’ the authors insist. ‘But it took at least two generations for its history to take shape.’

…But what do we read? What should we read? True to the book’s subtitle, the authors follow their history with a ‘Guide to the First Hundred Books.’ …The list’s logic is informed by the authors’ innovative definition of ‘Holocaust literature’ itself: ‘Holocaust literature comprises all forms of writing, both documentary and discursive, and in any language, that have shaped the public memory of the Holocaust and been shaped by it.’…. ‘Holocaust Literature’ offers something for a remarkable range of readers, from the scholarly expert for whom the repeated references to metonymy will resonate to the less experienced reader, who may simply seek to augment a reading list.”