This month The Jewish Foundation for the Righteous (JFR) recommends FDR and the Jews, by Richard Breitman and Allan J. Lichtman.  FDR and the Jews was reviewed by David Oshinsky in The New York Times. His review follows: 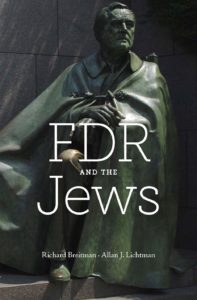 “FDR and the Jews, by Richard Breitman and Allan J. Lichtman, … is the latest, and most thoughtful, entry into this scholarly minefield. And much like Wyman’s book, though with a very different premise, it traces the American roots of this story. Sadly, Roosevelt left behind a rather thin paper trail. He didn’t write a memoir or record many White House conversations, and he refused to allow note-taking at his personal meetings. To fill this gap, Breitman and Lichtman have combed the archives of the leading players who did write down their thoughts and recollections, and the result is quite impressive. Even those who disagree with the book’s conclusions must acknowledge the mountain of research on which they rest.
And the main conclusion is this: While saving the Jews of Europe was never a high priority for Roosevelt, he did more for them than any other world leader at the time, despite the enormous obstacles he faced at home. It’s the ultimate middle-ground approach. Breitman and Lichtman are not shy about pointing out the failures of previous books on the subject, which they claim are either too forgiving of the president or not forgiving enough. “Our work challenges both extremes in this dispute,” they write, adding: “Unlike other authors, we examine F.D.R.’s decision-making as president from the perspective of his life experiences and full political career.”…

How, then, does this new portrait of Roosevelt differ from the damning one drawn by the revisionists? The answer rests on how one measures the president’s gestures and accomplishments against the pressures he faced to do even less. In 1938, for example, Roosevelt recalled his ambassador to Germany to protest Kristallnacht, the Nazi pogrom. It was little more than a symbolic act, but he was the only head of state to do so. Over protests from his notoriously anti-Semitic State Department, moreover, Roosevelt encouraged efforts to settle European Jews in Latin America — about 40,000 of them made it there from 1938 to 1941 — and pressed the British to keep Palestine open to Jewish refugees. Most important, perhaps, was his approval of the War Refugee Board in 1943, which, while often ignored and always underfunded, worked with heroes like Raoul Wallenberg throughout Nazi-occupied Europe to save untold thousands of Jews.

As to the most contentious revisionist claim — that Roosevelt could have blunted Hitler’s killing machine by ordering the rail lines to Auschwitz destroyed — Breitman and Lichtman provide a measured response. There is little doubt, they write, that Allied planes were capable of reaching this destination by mid-1944. Industrial complexes in the area were already being bombed. The problem was that the War Department viewed the project as a diversion from more important military targets. Opposition was such that the matter never appears to have reached the president’s desk. How successful the precision bombing of Auschwitz would have been, given the mixed results elsewhere, is a matter of debate. What is undeniable, however, is that close to 250,000 Jews were murdered in the months between the capture of this death camp and the German surrender in May 1945. When it came to the Final Solution, the Nazis were demonically resourceful. They found ways to kill Jews to the very end.

In their conclusion, the authors rightly note the squeamishness of America’s modern presidents in dealing with genocide…

Indeed, an even stronger case might be made for him than the one put forth in this eminently sensible book. Roosevelt masterfully prepared a skeptical nation for a war against global tyranny. Always viewing Hitler as his primary enemy, despite the Japanese attack on Pearl Harbor, he supplied the Soviet Union with much of the matériel it needed to defeat the Nazis on the Eastern front, an extremely controversial move. The American landing in North Africa in 1942, bolstering British troops there, may well have saved that region’s Jews from extermination. And the final defeat of Germany, costing hundreds of thousands of American lives, ended the Holocaust for good.

Early in 1945, following the Yalta conference with Churchill and Stalin, the president traveled to the Middle East, saying he’d most likely never “get over here again.” Roosevelt had always considered himself a master of persuasion, but his key meeting with the Saudi king Ibn Saud did not go well. Noting that Europe’s surviving Jews had suffered “indescribable horrors,” he assured the king that allowing them into Palestine would improve the land for Arabs as well as Jews. Ibn Saud was unmoved. Cooperation with Zionists was impossible, he replied; that door was closed. Returning to America, the exhausted president actually apologized to Rabbi Stephen Wise, a prominent Jewish leader, for failing “your cause.” Roosevelt died the following month at the Little White House in Warm Springs, Ga. — sadly aware, one suspects, of the unceasing bloodshed between Jews and Arabs that lay ahead.