This month the JFR recommends After Such Knowledge by Eva Hoffman. It was reviewed in The Guardian by Elspeth Linder in April 2004. The review reads: 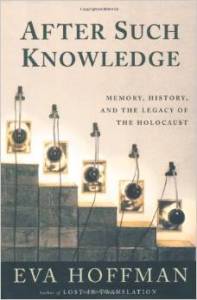 “Knowledge about the Holocaust has shifted its shape in the past 60 years. The ‘latency’ phase of the 1950s, a time of forgetting or even denial, metamorphosed into the ‘memory’ period of the 1990s, an era of museums and memorials and anniversaries, when remembering could seem more important than thought.

Soon, the generation which survived will have disappeared and the legacy of the Shoah, a term Eva Hoffman uses interchangeably with Holocaust, will be handed on, in particular to their children. A complicated inheritance will thereby take on a further burden, to which this book is one significant response.

Children of Holocaust survivors already carry their own complicit knowledge of the past, a ‘supercondensed pellet of primal information’, as Hoffman describes it. Often, they cannot remember when they first heard about the Shoah; many imbibed, at a precognisant age, their parents’ trauma. In homes marked by secrets, silence, withdrawal (or suffocating overattention), anxiety and unresolved pain, they took on despondency, panic and the impossible duty to rescue their parents.

Freeing themselves of this bond of haunting yet lesser involvement with an event they never experienced has, for many, taken a lifetime. Hoffman acknowledges the age it has taken her to unravel the threads of the past. But her book reveals that she has done far more….

As both a second-generation member and a writer and academic, Hoffman has mapped out a terrain that includes her own and her family’s experiences as well as the larger historical, psychological and philosophical associations. She refuses to be burdened by the history that has moulded her. Thought, moral reflection and a constant litmus-testing of response make up the armoury with which she explores the Shoah’s aftermath….

Moving on does not mean forgetting. Hoffman believes in supplanting moral passion with moral thought, which means incorporating memory into our consciousness of the world. Her graceful and honorific book is the sincere expression of that belief.”