This month The Jewish Foundation for the Righteous (JFR) recommends Hitler’s Furies by Wendy Lower. Hitler’s Furies was reviewed by Dwight Garner in the New York Times on October 9, 2013. Part of his review follows: 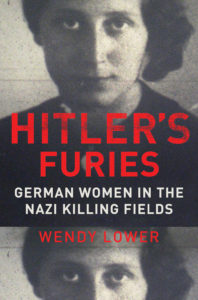 “’…German schoolgirls were not taught subjects such as Latin, since knowledge of this kind was not necessary for future mothers,” Wendy Lower writes in her disquieting new book, “Hitler’s Furies: German Women in the Nazi Killing Fields.” Instead, girls “were given pamphlets with advice on how to pick a husband: the first question to ask a prospective mate was, ‘What is your racial background?’

Ms. Lower’s book is partly the study of a youthquake. She scrutinizes the legion of fresh-scrubbed German “baby boomers” who were born in the wake of World War I and grew up with Nazism. “Terror regimes,” she notes, “feed on the idealism and energy of young people.”

…We know plenty about the lives of young men in the Nazi regime.  Ms. Lower is here to fill us in further on the young women — she calls them a lost generation — who, swept up in a nationalistic fervor, fled dull lives by going to work for the Reich in the Nazi-occupied East, in places like Poland, Ukraine and Belarus. They were after travel, nice clothes, adventure, paychecks, romance. Once there, many connived at genocide…

She follows more than a dozen German women — nurses, secretaries, schoolteachers, wives of SS officers — who stand in for an estimated 500,000 German women who went into the occupied East and thus undeniably stood, the author argues, in the killing fields.

“The role of German women in Hitler’s war can no longer be understood as their mobilization and victimization on the home front,” Ms. Lower says. “Instead, Hitler’s Germany produced another kind of female character at war, an expression of female activism and patriotism of the most violent and perverse kind.”

Or, as she puts it more memorably, about SS wives who became perpetrators: “These women displayed a capacity to kill while also acting out a combination of roles: plantation mistress; prairie Madonna in apron-covered dress lording over slave laborers; infant-carrying, gun-wielding hausfrau.”

…The moral point Ms. Lower repeatedly makes is that “there were choices concerning how one behaved during and after the war.” Men and women weren’t punished for refusing to take part in the killings of Jews. “In favoring perceived duty over morality,” she writes, “men and women were more alike than different…

”The last chapters of “Hitler’s Furies” are infuriating and sickening for different reasons. Ms. Lower explores these women’s experiences after the war. Most simply slipped back into civilian life. Few of these hundreds of thousands of German women were prosecuted, and even fewer were punished.“What happened to them?” Ms. Lower asks. “The short answer is that most got away with murder.”’