This month Bill recommends The Abandonment of the Jews: America and the Holocaust 1941-1945, by David Wyman. 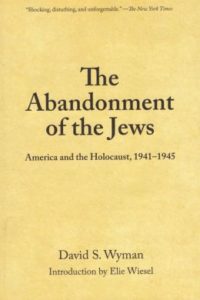 The Abandonment of the Jews: America and the Holocaust 1941-1945 examines the bystander role that the American government adopted during the Holocaust. Wyman, Professor Emeritus of History and Judaic Studies at the University of Massachusetts, Amherst, levels a sharp critique at the Roosevelt administration. He argues that it failed to do as much as it could have and should have done, given its knowledge of what was happening and its capacity to intervene. The United States, he asserts, could have saved several hundred thousand Jews by easing barriers to immigration and by bombing access routes to killing centers or the camps themselves. An excerpt from The Abandonment of the Jews appears in chapter 4 of Voices & Views.

In the historiography of American inaction during the Holocaust, Wyman’s highly critical stance differs from the perspective of scholars such as Henry Feingold, whom many of you have heard at the Summer Institute. As Professor Feingold pointed out at the 2005 program, he emphasizes the importance of historical context and the related problem of hindsight, leading him to a more tempered judgment of the Roosevelt administration. In his bookBearing Witness: How America and Its Jews Responded to the Holocaust, also excerpted in chapter 4 of Voices & Views, Feingold develops this line of reasoning and distinguishes it from Wyman’s interpretation of events. Both scholars are worth reading further; their perspectives illuminate a key aspect of Holocaust history, one that American students are often eager to explore.