This month the JFR recommends A World Without Jews: The Nazi Imagination from Persecution to Genocide by Alon Confino. The book was reviewed in Kirkus.  The review follows: 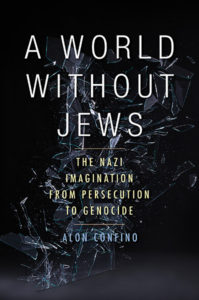 An insightful new study that develops the theme of Jewish annihilation as necessary to the Nazi myth of genesis.

Using a wealth of standard historical sources, such as anti-Jewish propaganda, as well as evidence considered unique in the history of genocide, such as the Nazis’ burning of the Bible, Confino… pursues the chilling buildup to the Holocaust, from 1933 onward, in Germany as emotional, messianic and not at all secretive. The Nazi message from the beginning was to purge Germany of the evil (namely, Jews) responsible for “every phenomenon of the modern world objectionable to the Nazis,” from bolshevism to liberalism to democracy (the list is a long one and nearly laughable). The burning of the Torah and other texts, conducted like a national festival, seems puzzling outside of sheer Nazi hooliganism, but it was an act posited by Confino as a deliberate, public consolidation of Nazi intention and legitimacy. Everyone would participate in the purge of “contaminated” books, and these symbolic “acts of purification,” repeated and rehearsed in subsequent anti-Jewish laws on both the local and national level, goaded regular Germans into an emotional response “that claimed to link the individual to the collectivity based on anti-Jewish sentiments.” The destruction of synagogues, for example, was a way to destroy history, severing any connection between Jews and Christians in order to make way for a new German national myth of genesis. Desecrating the Hebrew Bible was an intimate act of violence, requiring all five senses, as Confino hauntingly portrays, and it allowed the Nazis to supersede the Jews as a chosen people, to extinguish Jewish authority over the past—and claim history and time itself.