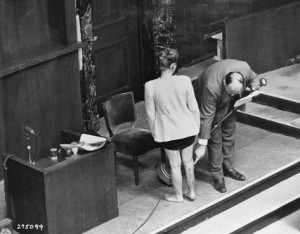 Concentration camp survivor Jadwiga Dzido shows her scarred leg to the Nuremberg court, while an
expert medical witness explains the nature of the procedures inflicted on her in the Ravensbrück
concentration camp on November 22, 1942.
(Courtesy of the United States Holocaust Memorial Museum Photo Archive)

Following the success of the Nuremberg Military Tribunals, the United States presided over the Subsequent Nuremberg Proceedings, a series of twelve military tribunals against members of Nazi leadership. The first in the series was the Doctors Trial, which started on December 9, 1946, and lasted until August 20, 1947. Twenty physicians and three administrators were placed on trial for their participation in war crimes and crimes against humanity. Their victims included the mentally ill, physically impaired as well as thousands of concentration camp prisoners, among them Jews, Poles, Russians, and Roma Sinti (Gypsies).

The Chief of Counsel, Brigadier General Telford Taylor, opened the trial stating “The defendants in this case are charged with murders, tortures, and other atrocities committed in the name of medical science. The victims of these crimes are numbered in the hundreds of thousands. A handful only are still alive; a few of the survivors will appear in this courtroom. But most of these miserable victims were slaughtered outright or died in the course of the tortures to which they were subjected. For the most part they are nameless dead. To their murderers, these wretched people were not individuals at all. They came in wholesale lots and were treated worse than animals.”

In addition to examining 1,500 documents, the court also heard from eighty-five witnesses.  One of those witnesses was Father Leo Miechalowski, a Roman Catholic priest arrested with other clergy after the invasion of Poland in 1939 and brought to Dachau as a political prisoner in December 1940.  From his testimony, Father Miechalowski describes being infected with malaria along with sixty other prisoners by holding infected mosquitoes until he was stung. Afterward, a series of injections and medications were given in order to see their effects on Father Miechalowski. Additionally, Father Miechalowski was subjected to hypothermia experiments. American forces liberated Dachau in April 1945.  For a transcript of Father Miechalowski’s testimony click here, it was published by the US Holocaust Memorial Museum from collections held at the US National Archives.

Sixteen of the doctors were found guilty. Seven were sentenced to death and were executed on June 2, 1948. Seven were acquitted and another nine received prison sentences ranging from 10 years to life.

When discussing the Doctors Trials or the other Nuremberg Trials with your students consider who has been held accountable for the Holocaust and other genocide. Explore how the groundbreaking trials at Nuremberg helped establish an international legal framework for the prosecution of genocide as well as leaving a lasting legacies in other realms: For example, how did the trials impact those who survived the Holocaust? How did they influence the memory of the Holocaust?