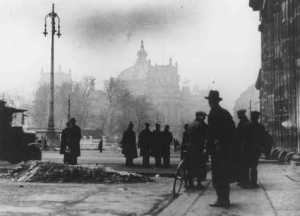 Onlookers in front of the Reichstag (German Parliament) building after its virtual destruction by fire. Berlin, Germany, February 28, 1933.
(Courtesy of Bildarchiv Preussischer Kulturbesitz)

Shortly after 9:00 P.M. on February 27, 1933, a Dutch communist named Marinus van der Lubbe broke into the Reichstag building in Berlin and set fire to it. The flames destroyed large parts of the building, including the assembly hall. Hitler and other Nazi leaders arrived on the scene and immediately blamed the Communists. Claiming that a Communist revolution was imminent, the Nazis used the incident as justification for the mass arrest of roughly 4,000 members of the Communist Party and the Social Democratic Party.

On February 28, President von Hindenburg granted Hitler emergency powers by issuing the “Decree of the Reich President for the Protection of the People and the State.” Intended to prevent Communist acts of violence, the decree suspended civil rights, including freedom of assembly and association, freedom of opinion, privacy of letter, post, telegraph, and telephone, inviolability of the home, and the guarantee of private property. All of these rights had been protected under the Weimar Constitution. The decree also called for the national Reich government to assume the powers of the state governments, and it introduced the death penalty for the crimes of arson and high treason.

This calculated government reaction – the names of many arrested after the fire came from prewritten lists – prompted suspicion that the fire had been set by the Nazis. An underground passage ran between the palace of the Reichstag president, Herman Göring, and the Reichstag building, which could have
been used as an escape route for the arsonists. Lubbe was the only person found on the scene and he claimed that he acted alone, but it seemed unlikely that one person could have spread the flames throughout the building. Four other Communists were charged along with van der Lubbe, but the Dutchman was the only one convicted and executed. Hitler was furious that the others got off, but he had succeeded in abolishing basic rights. Along with the Enabling Law of March 1933, the Reichstag Fire Decree laid the foundation for the Nazi dictatorship.

You might talk about the Reichstag fire as part of a broader discussion about the rise of the Nazi regime. Also, the way the Nazis responded to the incident – and the spin they put on it – typify the tactics and measures they would soon use against the Jews.