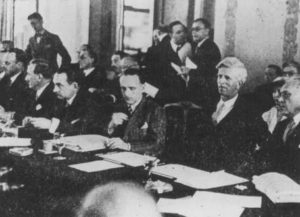 The Evian Conference
Far Right are the two US Delegates: Myron Taylor and James McDoald
(Photo courtesy of USHMM and the Leo Baeck Institute)

By 1938, about 150,000 Jews had fled Germany.  When Germany annexed Austria in March 1938, another 185,000 came under Nazi rule.  Many German and Austrian Jews who wanted to leave could not find countries willing to take them in.  A substantial number tried to go to the United States but were unable to obtain the necessary visas.  Congress had established immigration quotas in 1924 that limited the number of immigrants and discriminated against groups considered racially and ethnically undesirable.

Eleven days after the annexation, President Franklin Roosevelt proposed an international conference to facilitate the emigration of refugees from Germany and Austria and to establish a new international organization to find a solution to the refugee problem.  A primary motivation for the US Department of State, which had first suggested the conference, was to answer pressure in the US for more liberal immigration legislation.  Roosevelt made it clear that no country would be expected to change its present policies.

From July 6 to 15, 1938, delegates from 32 countries met at the French resort town of Evian on Lake Geneva.  Roosevelt chose Myron C. Taylor, a businessman and close friend, to represent the US at the conference.  During the meeting, delegate after delegate rose to express sympathy for the refugees and to offer excuses for why his country could not take more in.  Only the Dominican Republic agreed to accept additional refugees.

The delegates established the Intergovernmental Committee on Refugees (ICR) and set two goals for it: to “approach the governments of the countries of refuge with a view of developing opportunities for permanent settlement” and to persuade Germany to cooperate in establishing “conditions of orderly emigration.”  The ICR received little authority and virtually no funds or other support from its member nations.  Thus it had very little success leading up to the start of the war in September 1939 in convincing countries to allow in refugees.

The Evian Conference crushed the hopes of hundreds of thousands of European Jews who were desperate to flee.  The events of Kristallnacht four months later were widely publicized and signaled to the world that the Jews could no longer live under Nazi rule.  But, the Western democracies made it clear that they were would do little to help the Jews of Europe.

You might talk about the Evian Conference when covering the material on Refugee Policy or on America’s reaction to Hitler. It is important to explain the difficulties that Jews faced in leaving Europe and the complex considerations that led political and diplomatic leaders to do less that they should have and could have to help the Jews.