24 Alfred Lerner Fellows attended the 2018 Advanced Seminar. It was good to catch-up with everyone. Our scholars were outstanding!  Amy McDonald, JFR Lerner Fellow (2011) and Goldman Awardee, presented on her recently published book, Determined to Survive. 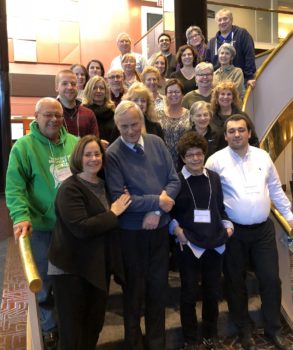 2018 European Study Program to Germany and the Netherlands

Professor Peter Hayes and I reviewed the study program itinerary and it is going to be a terrific learning experience. Our plans call for us to visit Frankfurt, Worms, Speyer, Weimar, Buchenwald, Dora Mittelbau, Bergen-Belsen, Westerbork, and Amsterdam. Since we will be in Western Europe, the cost of the study program will be more expensive than our previous study programs to Eastern Europe. We have tried to keep costs as low as possible. I should have a final participant cost shortly.

After receiving feedback from Center Executive and Education Directors as well as Lerner Fellows, we are quoting a land only package. This means that the airfare to and from Europe is to be arranged by and paid for by the participant. This enables the participant to source the least expensive ticket on an airline of his/her choosing, to use points from a credit card, or to use airline miles. It also enables each participant to arrive in Europe early or remain in Europe after the program.

Professor Hayes is reaching out to his contacts in Germany and I have reached out to my friends at the Anne Frank House as well as to folks in Worms and Speyer. Additionally, we are going to visit some of the places that Ann Mollegarden’s father lived during the 1930s, before he left Nazi Germany. Ann is a Lerner Fellow (2003) from Alabama and serves on the Alabama Holocaust Commission as well as the board of the Birmingham Holocaust Education Center.

While we have heard from a number of Lerner Fellows about their interest in the Study Program, if you have not already done so, please let me know if you are interested in joining us this July. The dates of the program are July 8 through July 16, 2018.

Maureen Carter, JFR Lerner Fellow (2004) organized an outstanding Student Summit on Saturday, January 20, 2018. Held in the board room of the School District of Palm Beach County, the program was for middle and high school students. For the JFR, it was a reunion of Lerner Fellows. Frances Kennedy (2014), Amy McDonald (2011), Bodgan Paraschivoiu (2017), and Bradd Weinberg (2015) attended the Student Summit. Amy and Bradd presented as did Professor Peter Hayes, and Pastor Chris Edmonds, son of Master Sgt. Roddie Edmonds, a Righteous Gentile. In 2016, the JFR produced a documentary on Master Sgt. Edmonds. If you have not seen it, click here to view the documentary which won four national awards in 2017.

To our teachers near southern Ohio, Roman Kent will be speaking at Miami University, on February 21, 2018.  Stanlee will be accompanying Roman who will be kicking off Miami University’s Holocaust and Genocide Education Program.  If you would like more information about the program, please email Stanlee at [email protected].