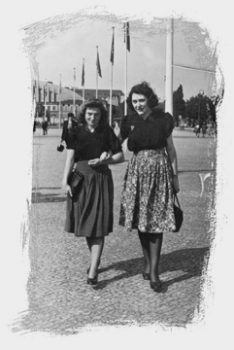 Berlin, Germany… September 1942 – In 1938, Erna Puterman was working as a seamstress in Berlin where she met Frieda Adam, a co-worker. The two teenage girls became friends. Even when Erna was forced to change jobs because she was Jewish, Frieda continued her friendship with Erna. Frieda refused to be intimidated by the anti-Jewish laws and climate.

Life became increasingly difficult and exceedingly harsh for the Jews of Germany. In September 1942, Erna’s mother was arrested and put in a camp in Germany. Later, she was sent on one of the early transports to Auschwitz. Erna was left to care for her brother who was deaf. Not knowing what to do, Erna went to Frieda for help and advice.

Frieda’s response to Erna was immediate, “As long as there is food for us, there will be food for you, too.” Thus in September 1942, Erna and her brother went into hiding for more than two years. Frieda had three small children ages six, four, and two, and a husband in the German army. Frieda said of her husband, “He was an evil man. Everyone was evil back then.” When Frieda’s husband discovered that she was hiding two Jews, he began to blackmail her. Late in 1944, Frieda was forced to find Erna and her brother another place to hide. They all survived the war.