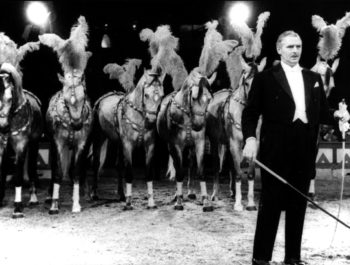 Adolf Althoff and his circus

Darmstadt, Germany… Summer 1941 – Adolf Althoff and his wife, Maria, directed the well-known Althoff circus during World War II. The circus, which included approximately 90 performers, traveled throughout Europe and spent the summer of 1941 near Darmstadt. At one particular show, Irene Danner, a young Jewish acrobat from Darmstadt, was among the visitors. She was a descendant of a German-Jewish circus family. Although Adolf knew that including a Jew in the circus was prohibited, he offered Irene a position, provided her with a pseudonym and false identity papers, and essentially disguised her Jewish identity for the duration of the war.

During her time in the circus, Irene fell in love with another acrobat, Peter Storm-Bento. When she later became pregnant, Adolf and Maria ensured that she received adequate medical care.  On March 20, 1942, deportations from Darmstadt began, followed by additional deportations in September 1942 and February 1943. Though Irene’s grandmother was deported, her mother, Alice, and her sister, Gerda, escaped to the safety of the Althoff circus. The Althoffs agreed to provide refuge for Alice and Gerda as well.

Adolf and Maria Althoff were fully aware of the dangers associated with hiding Jews. They knew that the circus could be searched at any moment and that their employees could betray them. Fortunately, Adolf had contacts in nearly every city who usually warned him of pending searches. Despite a few close calls, Irene, Alice, and Gerda all survived the war.