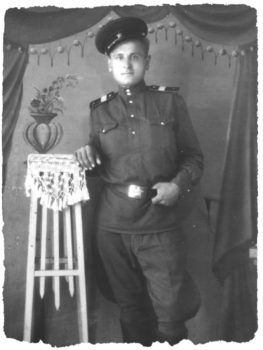 Petlikovce Novce, Poland… 1941 – Rather than forcing the Jews of Buchach, Poland (now Ukraine), into a neighboring ghetto, the Germans killed the Jews on the outskirts of the village. A small number of Jews managed to escape the Aktion, which occurred in 1941, including Dr. Avraham Khalfan, a dentist, and his wife, Sara, an internist. The Jews fled to the woods where they hid for months. Realizing that they could no longer survive in the woods, Dr. Khalfan approached Grigori’s father, Ilya, and begged him to help him and five other Jews, including Sara, Avraham’s sister and son, and two colleagues. The Baran family knew Avraham and Sara who would come to their village of Petlikovce Nove to treat patients. Ilya agreed to hide them.

His decision was not well received by his wife, Mariya, who feared for their lives. Nevertheless, that evening the six Jews arrived at the Baran home. The Jews were in terrible condition having lived in the woods for months. The Baran family fed them and hid them in the attic. Over the next several weeks, Grigori and Ilya built a more secure hiding place in their shed.

The Baran family had to work very hard to feed these six extra people. Mariya cooked, and Grigori brought them food and water and took away their body waste. Mariya was not a strong woman and much of the responsibility for caring for the six Jews fell to Grigori.

The family lived on the outskirts of the village near the woods and their neighbors did not know about the Jews hiding in the shed. Late at night the Jews would leave their hiding place for some fresh air.

In 1943, the Germans came to search the house. There had been a report that the Baran family was hiding Jews. The family denied this charge. The Germans severely beat Ilya, but they did not betray the Jews in hiding and the Germans eventually left. Grigori’s brother was later killed by the Germans. Ilya’s brother, Mikhail, and his family also hid three Jewish men.

In March 1944 the village was liberated by the Soviet army. The Jews left the Baran farm to return to their village. After the war Ilya was arrested and sent to Siberia.