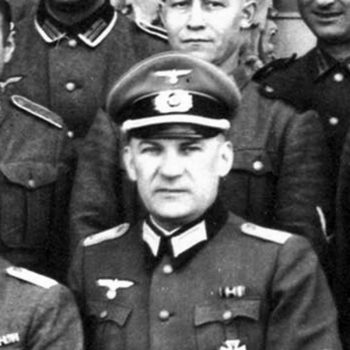 Przemyśl, Poland… July 26, 1942 – As a 51-year-old lawyer, Albert Battel fulfilled his German army-reserve duty in Przemyśl, Poland, serving as the adjutant to the local military commander, Major Max Liedtke. When the SS attempted to carry out the first liquidation of Przemyśl’s Jews, Battel and Liedtke ordered the army to block the bridge over the River San, the one entry-point to the Przemyśl ghetto. As the SS troops continued to advance along the bridge, Battel’s guards commanded them to stop and threatened to open fire on them. At the same time, Battel arranged for army trucks to collect some 100 Jews from the ghetto and to bring them to the barracks of a local military base where the Wehrmacht, German military, could protect them. The Jews in the ghetto who were not able to make it to the military base were deported by the SS to the Belzec death camp.

After this episode, which was a great embarrassment for the Nazis, the SS began a secret investigation of Battel. Battel, while a member of the Nazi party since 1933, had previously raised suspicions among Nazi officials. Before the war, he had been indicted for offering a loan to a Jewish colleague, and while serving in Przemyśl, he had been reprimanded for shaking the hand of Dr. Duldig, the head of Przemyśl’s Judenrat who was a friend from university. Unknown to Battel, the investigation into his actions was treated with great seriousness; Heinrich Himmler had vowed to arrest Battel after the war.

Battel was released from the army in 1944 due to a medical condition. Upon returning to his hometown of Breslau, he was drafted into the Volkssturm (a German national militia founded during the last few months of the war) and subsequently captured by the Russians. At the end of the war, he was released and settled in West Germany.  Due to his prior affiliation with the Nazi party, he was not able to practice law.