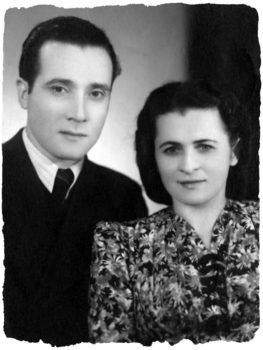 Czortowiec, Poland… 1943 – When the Germans invaded Czortowiec, Poland (now Ukraine), they erected a labor camp across from Janina Kowalyk’s home, which she shared with her mother, Karolina. When her mother became ill, Janina persuaded a German officer to let one of the Jewish physicians in the labor camp treat her mother.

Dr. Berger took care of Karolina and asked if she would hide him, were he to escape from the camp. One night, Dr. Berger arrived at their home with several people. It was a tiny home, yet Janina and Karolina hid 5 Jews. Several other Jews were sheltered at the home of Janina’s sister and a three-year-old child was taken to an aunt’s home in Krakow.

It was very hard to obtain food for so many people. The toilet was outside, so they had to use a pail. Clothes were washed in the evening. Karolina would iron the clothes and the Jews would say “Mama, don’t press our clothes, give them to us like that.” They did not understand that Karolina ironed the clothes so they would dry.

Janina and the Jews she was hiding survived several raids by the Gestapo. When the war was over Janina married Dr. Berger.