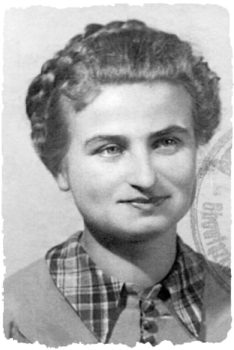 Warsaw, Poland… April 1943 – Fryderyka Godlewicz was born in Gdynia, Poland.  With the outbreak of the war, her parents, Shlomo and Tzivia, moved the family to Warsaw. Her parents died in the ghetto and Fryderyka’s aunt and uncle, who were hiding on the Aryan (Christian) side, assumed responsibility for their six-year-old niece.

Fryderyka’s uncle, Dawid, approached the Central Welfare Council, a Polish social organization that the Germans permitted to operate during the war, and asked for their assistance in finding a place for Fryderyka to live.  Fryderyka was described as the child of political prisoners.  Katarzyna Domanska, one of the volunteers at the Central Welfare Council, agreed to take the young girl to her house.  Frederyka’s uncle had obtained a false birth certificate for her with the name of Franciszka Piasecka from the Central Welfare Council. However, Frederyka’s appearance left no doubt in Katarzyna’s mind that the child was Jewish.  Despite the great danger for their own lives, Katarzyna and Marian Domanski decided to keep the child in their home.

The responsibility for the day-to-day care for Fryderyka, who they called Ania, was given to the Domanski’s eighteen-year-old daughter, Leokadia.  Leokadia treated Ania as her younger sister. She bathed her, read to her, played with her, and protected her.  When it was safe, Leokadia would take Ania outside.  The Domanski family lived in a one-room apartment on the ground floor of their building.  Marian was a construction foreman, his wife Katarzyna was a residence registration clerk in their building.  Leokadia’s family was very poor; however, they shared whatever they had with Ania.

It was not until after the war, when her uncle came for her, that Ania learned that she was Jewish.  Ania and her uncle left for Israel in 1950.

Marian and Katarzyna Domanski died years ago.  Leokadia Domanska passed away in August 2012.